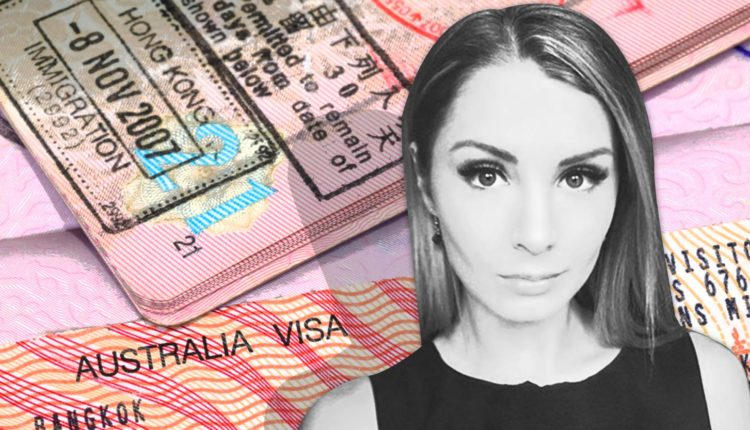 Far-right personalities who’ve gone on tirades against immigration are now experiencing tough border security first-hand after getting turned away from multiple countries.

Lauren Southern, a far-right activist who was previously involved in a campaign to stop aid boats for migrants, was turned away from Australia this weekend, shortly before she was slated to start a speaking tour alongside alt-right personality Stefan Molyneux. The move comes days after white nationalist Richard Spencer was denied entry to most of Europe after he tried to attend a conference in Sweden.

Southern, a Canadian YouTuber, has written a self-published book calling immigrants “barbarians” who are “ruining everything.”

Southern has also collaborated with Europe’s far-right to deny aid to shipwrecked migrants. She helped fundraise for “Defend Europe,” a campaign to sail a boat in the Mediterranean that would intimidate non-governmental organization ships that provide aid for migrants who cross the sea on small rafts, which often capsize or become stranded. Southern was on board the far-right’s rented ship on its maiden voyage, Vox reported.

On a later voyage, the “Defend Europe” boat approached an aid vessel doing search-and-rescue work off the coast of Libya. The far-right crew shot “shot flares and yelled hate slogans” at the other ship, The Daily Beast previously reported. (“Defend Europe” later needed rescuing of its own when its engines failed in the middle of the Mediterranean.)

This weekend, Southern was denied entry to a country in her own right. Australia, where Southern was scheduled to begin a cross-country tour with Molyneux. Southern had attempted to enter the country on the wrong visa, Australian authorities said in an email first reported by Sky News host Ross Cameron and later confirmed by one of Southern’s tour organizers.

Southern had attempted to travel Australia on a tourist visa that prohibits any business dealings outside of small, unpaid interactions like investigating a contract or “participating in conferences, trade fairs or seminars, as long as you are not being paid by the organisers for your participation,” the country’s Department of Home Affairs states on its website, which specifically states that “you must not work in Australia on this visa.”

“To the people saying ‘she applied for the wrong visa’ I’ve taken the advice of immigration lawyers from day one. This twitter lawyering is silly,” she tweeted Monday morning. “I have no interest in being banned from Aus and am still attempting to fight for my extremely delayed work visa.”

Southern was previously banned from the United Kingdom, along with two fellow anti-Muslim speakers, one of whom was also involved in the Defend Europe campaign.

Southern told the BBC that she had been denied entry due to her “distribution of racist material” during a previous trip. She later boasted of having identified herself as Pakistani on an official U.K. document.

You are now subscribed to the Daily Digest and Cheat Sheet. We will not share your email with anyone for any reason.

“They just locked me out and said ‘au revoir,’” she tweeted after being denied entry. “Officially banned from UK for ‘racism’.. doing fine though, all the cool people are being banned anyway”

Perhaps she was referring to Richard Spencer, who was banned by the U.K.’s conservative government in mid-2016. Spencer, who advocates for ethnic cleansing and invokes Nazi propaganda, had planned on visiting to deliver a speech in which he condemned immigrants and called for a white ethnostate.

Spencer, who claims white European superiority, was reportedly banned from the Schengen Area, a group of 26 European countries last November.

“I’m being treated like a criminal by the Polish government. It’s just insane,” Spencer told the Associated Press at the time. “I haven’t done anything. What are they accusing me of?”Despite Spencer’s and the far-right’s stances against “illegal” immigration, he appears to have violated his own ban last week, when Spencer’s far-right organization had secretly arranged for him to attend a white supremacist event in Sweden. But instead of making the conference, Spencer was reportedly stopped in Poland, where he had a layover to a Swedish flight, the group HopeNotHate first reported.

How to avoid a Condition 8503 No Further Stay

Behind the Scenes of NZ Customs (Mind-Blowing Finding!)