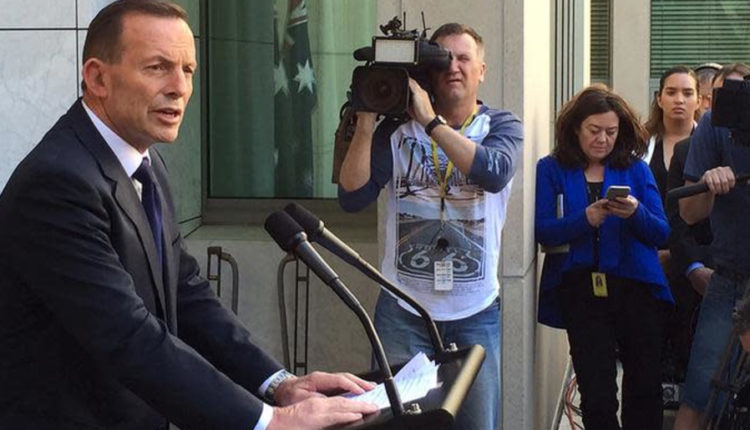 Abbott, who is currently in Israel to participate in the multilateral dialogue between Australian, Israeli, British and American political figures, NGOs and academics who have been brought together by Australian businessman and philanthropist Albert Dadon, told The Jerusalem Post on Sunday that he had actually proposed the moving the embassy at a previous dialogue in Jerusalem in December 2016, before US President Donald Trump had actually ordered the move of the US Embassy.

The question then begged to be asked: Why didn’t Abbott move the embassy during his own term as prime minister?

“It wasn’t on my radar,” he admitted. He only began think about it when Trump pledged during his campaign that unlike his predecessors he would follow through with the Jerusalem Embassy Act.

Abbott brought up the subject again in May last year when he came to Israel to receive an honorary doctorate from Tel Aviv University, and he was very outspoken about it in Australia this year in tandem with Trump’s promise becoming a reality.

Abbott sees it as much an act of solidarity with the US as he does with Israel.

“Australia has a much more extensive history with Israel than most Australians realize,” he said, as he recalled last year’s centenary of the Battle of Beersheba, which was essentially won by the Australian and New Zealand light horse units assigned to the British Army. Without that victory he surmised, there might not have been a Balfour Declaration. “The light horse made the Balfour Declaration possible.”

Abbott refrained from mentioning that Australian Foreign Minister Herbert Evatt had served as chairman of the UN General Assembly Ad Hoc Committee on Palestine in 1947 and had been instrumental in pushing through the favorable vote on the partition of Palestine on November 29, 1947. In fact, Australia was the first country to cast a “yes” vote.

Australia was also among the first countries to establish full diplomatic relations with Israel, doing so on January 29, 1949, three days after Australia Day, which marked the anniversary of its own independence from British rule.

Long before the Oslo accords, another former Australian prime minister, Bob Hawke, proposed a federation between Israel, Jordan and the Palestinians – a subject being increasingly discussed in recent years.

With the exception of a few hiccups along the way, Israel has enjoyed bipartisan Australian support, and according to Abbott, relations today are “really good, although there should be more defense and security cooperation.” He also said there should be stronger commercial ties “given the number of Australians with close ties to Israel.” The prime minister should come again with a large business delegation, he advocated.

During the actual conference, Abbott moderated a session on sovereign borders and illegal immigration by refugees. Illegal immigration is challenging the status of democracies, he said. In July 2013 Australia had a big problem with tens of thousands of refugees arriving illegally by boat. At one stage there were 50,000 refugees in the country.

After considerable prodding by the opposition, the Labor government finally introduced off-shore processing, and after the change of government, illegal immigration dropped from an average of 5,000 per year to zero.

The problem was very severe, he said, and was dealt with by a government that believed that it had an absolute right to control its borders. There was complete border cooperation with the military, along with a media blackout so that people smugglers would not know what was happening at sea.

When the people smugglers scuttled the boats and threw the refugees into the water, the Australian authorities gave them a large orange life boat and sent them back to Indonesia.

Would-be illegal immigrants soon learned that “there was no point paying $10,000 to people smugglers because the way was closed,” said Abbott.

It was a controversial policy that was denounced by many as immoral, he admitted, “but since it was put into place deaths at sea ended. The only way to stop deaths at sea is to stop the trade.”

Abbott’s advice to European colleagues was to blockade Libya. “Once you stop the trade, the illegal immigration stops.”

As for the moral problem, he noted that many people had sought refuge in other countries before opting for Australia, but had not been able to gain entry.

Richard Marles, the Australian shadow minister for defense and formerly the shadow minister for immigration and border protection, said the terms on which migrants are refused should be based on fairness, compassion and generosity. He found it difficult to reconcile these values with sovereign borders, saying, “Sovereignty wasn’t the starting point for me. It was human suffering. But sovereignty is important.”

It bothered him that there are 65 million displaced people in the world, which he said is the greatest number since World War II.

Deputy Knesset Speaker Hilik Bar said the refugee situation in Israel cannot be compared to that of Europe because Israel simply cannot afford to allow more non-Jews into the country.

“We need to be in charge of our own destiny,” he said. “We can’t allow ourselves to be a minority again.”