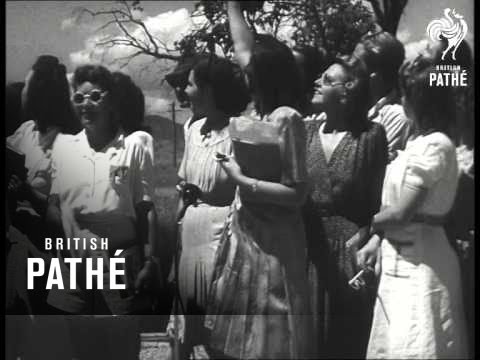 Immigrants From Europe In Australia (1948)

Displaced persons from Baltic countries at a camp where they learn English and the Australian way of life. CU. The signboard outside the camp “Reception and training centre Bonegilla”. LS. General view of the camp. Various shots of immigrants walking to the camp. CU. Men being taught English by a man instructor. Cuts from instructor to students (natural sound). CU. A woman instructor telling a class of girls and men about Australia (natural sound). CU. Immigrants at a meal. MS. A group of people with one girl speaking into mike (natural sound). She is talking about opportunity given to them by Australia etc. CU. A pair of cuckaburra birds singing (natural sound). CU. Picture cards used for a game rather like ‘Housey Housey’, for teaching purposes. CU. & MS. Male choir practising (natural sound). MS. The bride arriving for the first wedding in the camp in a car. MS. & CU. The bride and groom leaving the church after the wedding. LS. Back view of a group of men marching into a field. LS. Good Australian landscape. A mounted farmer rounding up sheep, river and mountains, a town by the river.

Study in Australia without IELTS