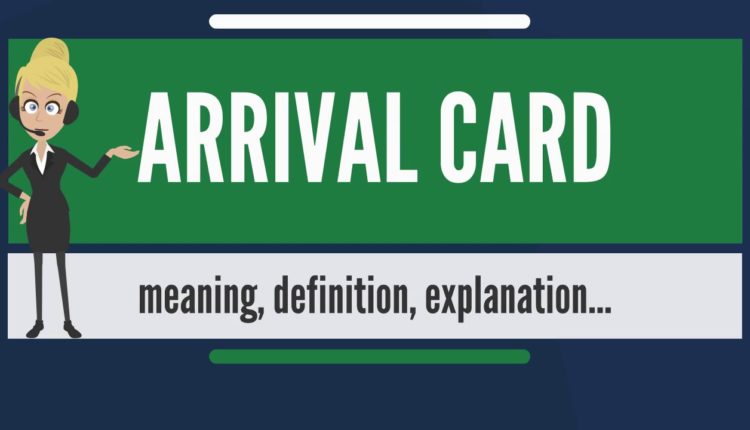 An arrival card, also known as an incoming passenger card, landing card or disembarkation card, is a legal document used by immigration authorities of many countries to obtain information about incoming passenger not provided by the passenger’s passport (such as health, criminal record, where they will be staying, purpose of the visit, etc.) and to provide a record of a person’s entry into the country. The card may also provide information on health and character requirements for non-citizens entering the country. Some countries require an arrival card for each incoming passenger, while others require one card per family unit, and some only require an arrival card for non-citizens only.

Some countries, such as Singapore, attach a departure card to the arrival card, which is retained in the alien’s passport until their eventual departure. The arrival card can also be combined with a customs declaration, which some countries require incoming passengers to fill out separately.

Some countries, such as Malaysia, do not require an arrival or departure card. The procedure of compiling information from immigration cards is no longer required by United States authorities following the introduction of the biometric recording system by the United States Immigration Department. There is minimal cross-border formality between a number of countries, most notably those in the passport-free travel area of Europe’s Schengen Zone.

The requirement to produce an arrival card is usually in addition to provision of a passport or other travel document, and sometimes a customs declaration.

How to Fill Australian Visa Form