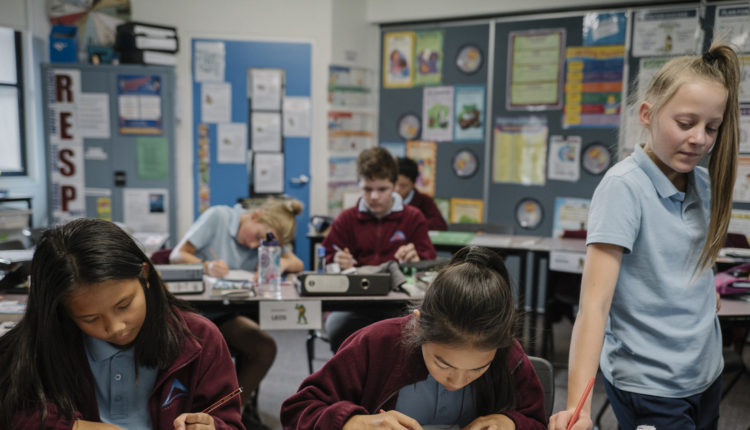 At a time when politicians in Australia, and around the world, are calling for restrictions on immigration, small towns in Australia are asking for more immigrants.

A lanky Filipina girl with long black hair stood at the wickets behind St. Patrick’s School, waiting for a pitch from a burly dad with a reddish beard.

The cricket ball came in slow. Her swing was quick as a bee’s wing, sending the ball skyward as a gaggle of kids — mostly Filipino, some white — cheered and elbowed to bat next.

The game, played on a recent afternoon, was a typical mixed gathering for Pyramid Hill, a one-pub town of around 500 people in central Victoria that has become a model of rural revival and multicultural integration.

“I’m still surprised they’re as open to us as they are,” said Abigail Umali, 39, a veterinarian from Manila who works at a local pig farm, and whose daughter, Maria, was the girl at bat.

“This school wouldn’t be here if it wasn’t for them,” said Kelvin Matthews, 36, the pitcher, as he watched the children interact.

Filipinos now make up nearly a quarter of Pyramid Hill’s growing population. New homes are going up here for the first time in a generation — and both the newcomers and lifelong residents say they have found the answer to rising concerns about immigrants straining resources in Australian cities.

“People in the country mix, and need to mix,” said Tom Smith, a pig farmer who inadvertently started the town’s revival in 2008 when he sponsored visas for four workers from the Philippines. “It’s just different out here; it’s the only way to survive.”

Rural collapse is a familiar tale, seen across the American Midwest and in many areas of Europe, where small communities have been squeezed by globalization. It’s no different in Australia: an urbanizing country, as physically large as the United States, where towns of a few hundred people are fading like puddles in the sun.

But the success of Pyramid Hill — and many other small Australian towns — suggests there are opportunities being missed and lessons to be learned. At a time when politicians in Australia, and around the world, are calling for restrictions on immigration, small towns in Australia are asking for more immigrants.

“There’s a real network of people who know how to make this work, who make it work in their community and can share it with others,” said Jack Archer, chief executive of the Regional Australia Institute, a government research organization. “This is something we should really be thinking about scaling up.”

Residents still talk about the era before the Filipinos came as one of quiet desperation. Streets without children. Homes decaying. The town’s population bottomed out at 419 in 2011, down from 699 in the 1960s.

“We were in dire straits,” said Cheryl McKinnon, the mayor of Loddon Shire, the municipality that includes Pyramid Hill. “We needed our population to grow.”

Economists often discuss immigration in terms of a multiplier effect. Newcomers do not just fill jobs, they also create them, by bringing demand for new products and services.

This is especially true in Australia, where the minimum wage is 18.29 Australian dollars an hour ($13.70) and most migrants are skilled workers or students.

“Australia’s focus on skilled migration has demonstrated positive effects for economic growth,” a recently published government report on population growth found, “because our migrants on average lift potential GDP and GDP per capita.”

In many cities and suburbs, though, population growth has brought frustration. Melbourne added 125,000 people during the last fiscal year, its largest recorded increase, and Sydney added 102,000. In both cities, immigration was the primary cause, prompting complaints about housing, crowded schools and traffic. The government of Prime Minister Malcolm Turnbull has responded to such concerns by restricting immigration: maintaining harsh offshore detention centers for asylum-seekers and limiting the number of skilled-worker visas.

“There just has got to be some employment opportunity,” said Archer of the Regional Australia Institute. “There’s more of that than people think.”

Labor-market participation in regional Australia — the areas outside major cities — is well above the national average. And because rural populations tend to be older, that means many people continue to work well after they might have wanted to retire.

Kia-Ora adjusted and expanded slowly, bringing in new employees (and their families) over several years. Many of the new hires were old friends of the early ones, or attended the same university in the Philippines, studying veterinary medicine or animal husbandry.

Some were already in Australia, like Umali, the vet, who moved to Pyramid Hill four years ago from Sydney with her husband and two children.

The work is hard and malodorous, the sort of job few Australians are eager to do. But it is also more sophisticated than many people recognize. Charts on births, weight gain and other metrics line the break-room walls, and Kia-Ora has been expanding into energy by producing electricity from biogas.

Despite the hard work, there has been little turnover among the employees.

“You wouldn’t believe how warm the people are here,” Umali said. Her voice seemed to crack with emotion. “They’ve learned to adapt.”

Research from the Regional Australia Institute shows that the areas reviving most quickly tend to offer new arrivals not just well-paying jobs but a sense of community.

In the Shire of Dalwallinu, a town in Western Australia’s Wheat Belt that is coming back to life, thanks to migrants from the Philippines and elsewhere, residents helped workers move their families from abroad.

In the small town of Nhill, in northwestern Victoria, locals have managed the arrival of ethnic Karen refugees from Myanmar since 2010, helping them find housing, learn English and engage in social activities.

Pyramid Hill’s evolution has been just as personal. Neighbors regularly meet to share food and learn about each other’s cultures.

“Every month there’s one Australian speaker and a Filipino speaker, and we cook for each other,” said Helen Garchitorena, 47, a leader of the exchange. “We explain the importance of the food, and we talk.”

The town has welcomed the Filipinos, in part, because families bring energy. But it also helps that, like the locals, many are Catholic, and they arrived in Australia speaking some English.

Programs to settle less-educated (or black or Muslim) migrants in small towns have sometimes proven more difficult. Even here in Pyramid Hill, awkwardness and disrespect are not unheard-of.

Duke Caburnay, 16, whose father works at Kia-Ora, said he runs up against racism when his team plays Australian rules football in other small towns. White players sometimes hurl racial insults at him.

Some of Pyramid Hill’s adult Filipino residents also say they are expected to outperform white counterparts just to be considered equal.

“They generalize a lot — Asians are like this, Australians are like that,” said Fritzie Caburnay, 46, Duke’s mother, who has a master’s degree in public administration. “Some people say the Filipinos have invaded.”

Still, she said, “we feel at home here.”

Umali eventually explained why she has grown so loyal to the town. Last year, she said, her husband was at Kia-Ora working his usual shift when he collapsed in one of the pig pens.

He died suddenly of a heart attack. He was 44.

An outpouring of support followed for her and her two children, Raphael, 12, and Maria, 10, the cricket batter. Every day, friends and even total strangers would appear at the wood-frame home she rents beside St. Patrick’s, smiling, carrying meals and money, or just offering emotional support.

The principal of St. Patrick’s, Colleen Hampson, had to fight back tears when discussing the tragedy and the community’s response.

“What happened to me here, I can’t even compare it to what would have happened in the Philippines,” she said, looking away to gain composure. “It’s actually overwhelming.”

Why student visa got cancelled in Australia