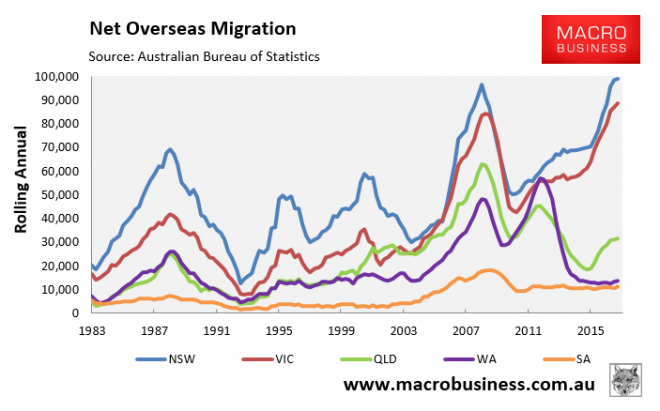 Berejiklian and Andrews must push back against mass immigration

For years we have lambasted the premiers of New South Wales and Victoria for sitting back idly while the federal government floods Sydney and Melbourne with migrants each and every year, thereby adding to already chronic strains on infrastructure and housing:

In the decade to September 2017, New South Wales and Victoria received a whopping 725,000 and 648,000 net overseas migrants respectively, with almost all of these settling in Sydney and Melbourne. And migrants are projected to continue inundating Sydney and Melbourne for decades to come, pushing their respective populations above 8 million people mid-century:

This immigration fuelled population boom is projected by Infrastructure Australia to worsen congestion and reduce access to jobs, schools, hospitals and green space, irrespective of what urban form both cities take:

Mass immigration is a fantastic policy for the federal government, which gets to artificially inflate Australia’s growth and employment statistics, as well as the Federal Budget (since the Commonwealth collects 80% of total tax revenue). Thus, mass immigration makes it look like a prudent economic and fiscal manager.

On the flipside, mass immigration is a giant millstone for State Governments, which collect only a small proportion of the tax revenue from immigration, but must bear the lion’s share of costs through economic and social infrastructure provision, such as roads, public transport, schools and hospitals.

For example, analysis by the Grattan Institute in 2014 showed that “unprecedented infrastructure spending by states and territories” since the escalation of population growth from 2004 is “largely responsible for a $106 billion decline in their finances since 2006“, and that “after a threefold increase in capital spending over the last 10 years, states are paying 3 per cent more of their revenues in interest and depreciation”.

Separately, Grattan executive director John Daley recently noted that “state governments were struggling to deal with rapid population growth in their major cities and the quality of life of residents – represented by the rapid growth in house prices in recent decades – was suffering”.

For the above reasons, I have frequently called on the Premiers of New South Wales and Victoria to band together and push back against the federal government’s mass immigration ‘Big Australia’ policy, as well as demand greater funding from the Commonwealth for infrastructure and service provision.

Sadly, my calls have fallen on deaf ears.

Over the weekend we witnessed NSW Premier Gladys Berejiklian ignore voters concerns and state that the immigration and population “numbers now are about right” as well as claim immigration and infrastructure “are not linked… to the extent people perceive them to be”.

For his part, the Premier of Victoria, Daniel Andrews, yesterday played down concerns that Melbourne’s population growth was too high, while also arguing that he was powerless on the matter, on ABC Radio. Via MB reader Shawn:

Listener Question: What would you like Melbourne’s population to peak at, or will it grow forever?

Premier: Well, we are seeing very strong population growth at the moment, and there is a bit of a debate going on about that. I think the best response to a growing Victorian population whether it be in Melbourne or in other parts of the state is to get on and get things done. That’s why we’re building more schools and hospitals…

Jon Faine: That doesn’t answer the question, about a target for population growth.

Premier: Well, there will be a whole lot of different views on that, my view on this is that rarely does a State government have the levers necessary to be controlling the number of people who come here. There are others who think you can just get on the phone to Peter Dutton and complain about things all the time. No my approach is get on, build the infrastructure we need, the road the rail, all those other things that we need. Get it done. That sets us up for growth. It also, it also fundamentally acknowledges we could go back to the 1990’s if you like, where people couldn’t wait to get out of here fast enough, that is not good.

Jon Faine: Managing growth is a completely different argument than having a specific target or a ceiling, isn’t that the point?

Premier: I’m not here to announce a growth target, but I am realistic to know that I don’t run immigration policy for instance.

This is pathetic from both Premier Berejiklian and Premier Andrews. Can you imagine if both premiers demanded the federal government cut immigration because of its deleterious impacts in both Sydney and Melbourne? The federal government would have no choice. And yet both premiers continue to pass the buck and support the current insane intake, or plead they are powerlessness.

When will Australia’s politicians represent their constituents on this issue?

What to expect from a registered migration agent