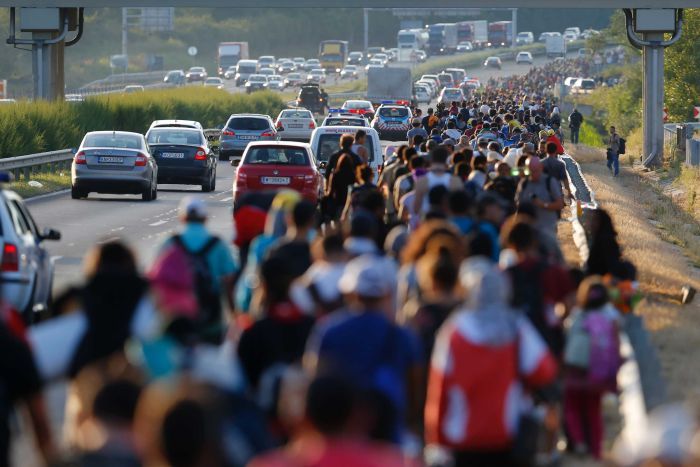 Photo:
Most of the desperate at Europe’s door are fleeing wars that we in the West either had a hand in causing or failed to stop. (Reuters: Laszlo Balogh)

The European migration battle reminds us that “should” is a word we probably shouldn’t use in politics and government. It tends to be a reality denier. 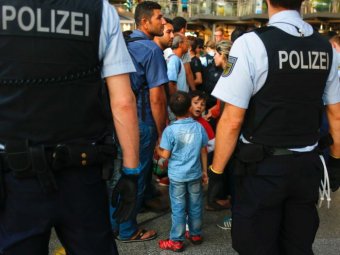 Long before the current European political crisis, with Bavaria’s CSU party this week bringing coalition government in Germany to the verge of collapse, the rest of Europe should have better helped Germany with the wave of a million refugees that arrived here in 2015-16.

It’s sometimes said, usually by observers not in Germany, that the migration debate is not about numbers. But it certainly is, in part.

Over a year, Germany took more refugees than Australia has taken since the end of the World War II. About 300,000 children have been put into schools and a quarter of a million migrants have found work, as Germany Inc. motors along.

In Munich alone, 20,000 migrants arrived at the central train station on the first weekend of September, 2015 — as many as then British prime minister David Cameron eventually agreed to take in five years.

A rich Europe, with a population of more than 500 million people, should have had the wherewithal to share the burden of accommodating a million new inhabitants — the creativity, the organisational capacity — even if only temporarily.

Should have, but didn’t. 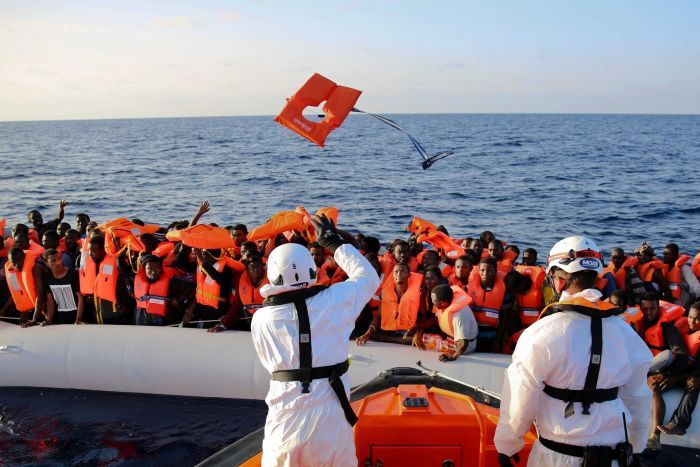 Photo:
Globalisation means not only the circulation of goods and services but people (container ships and migrant ships). (AP: Francesco Malavolta/MOAS)

“Should” is better argued in terms of benefits and its fit with democratic values than by duty of obligation.

Immigration offers Europe an antidote to falling birth rates, labour market shortages and pension systems in deficit, while most of the desperate at Europe’s door are fleeing wars that we in the West either had a hand in causing (Iraq, Afghanistan) or failed to stop (Syria), or material hardship of a dimension that most of us will never know.

Where is the moral justification in the fact that of 68 million refugees in the world, 85 per cent are in developing countries, while we in the West are screaming about playing host to the other 15 per cent?

Certainly if the benefits of absorbing that first wave of migrants had been resolutely argued and acted upon, we wouldn’t now have the extremist Alternative for Germany (AfD) entrenched as the largest opposition party in the national parliament, or a far left-right coalition in government in Italy, or the mainstream right embracing the far-right in government in Austria.

The reality the populists — proudly anti-should — claim to see with an Ancient Mariner-type clarity lost on the rest of us, is that the reason for the AfD, Italy’s hardline Interior Minister and a far-right vice-chancellor in Austria, is that voters put them there.

Moderate conservatives and liberals may consider their advent a nasty joke thrown up by the system, but there it is.

The great faux pas in this is that populists’ resistance to refugees finds an echo in the electorate — especially when refugees are Muslims or otherwise “don’t resemble us”. And instead of combatting the extremists’ bunk and posturing with facts and realities, mainstream politicians leave it largely uncontested.

Former Tory chancellor of the Exchequer George Osborne basically conceded this in a media interview at the weekend, saying that broadly pro-immigration politicians “had not done enough” to promote a positive vision of the benefits.

Immigrants tend to pay more into developed economies via taxation than they draw on welfare and public services, while statistics show that refugee flows into Europe have anyway dropped dramatically (by 96 per cent) since 20015-16.

Meantime, the incidence of crime in Germany, despite the “foreign” population spike, is down.

Globalisation means the circulation of people

German chancellor Angela Merkel’s warning at an EU summit last week, that failing yet again on migration could “decide the EU’s fate”, could be taken to mean its possible eventual demise. 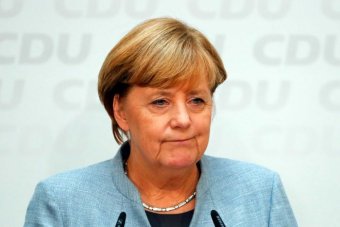 You would have to be a populist, though, to think this would miraculously put an end to migrant arrivals.

Globalisation means not only the circulation of goods and services but people (container ships and migrant ships), primed by social media to know how the other, Western half lives.

Yes, populists exist because national electorates voted for them. But if Europe’s mainstream politicians don’t finally grasp the nettle on migration, the dire risk is a tidal wave of extremists flooding the European Parliament at EU elections in May.

Europe will certainly then have reason to say, we should have acted.

Richard Ogier is Australian journalist and consultant based in Munich. He was Australian Embassy press attaché in Paris 2000-2014.

How much show money needed for an Australian tourist visa application?

How to obtain a Russian Visa – Step 2 – Visa Application Form