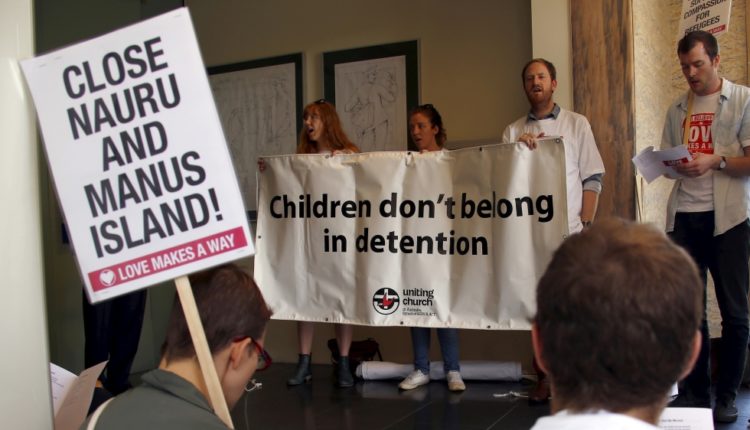 How colonialism shapes immigration policy in the US and Australia | USA

Separating families, deporting parents, caging children: from opposite sides of the globe, the United States and Australia have been trading ideas for punishing people who cross their borders for some years now.

According to the leaked transcripts of a phone call between the two leaders, Turnbull told his American counterpart that Australia has a policy to not let in anyone, even a “Nobel Prize winning genius”, who arrives in the country by boat.

“That is a good idea. We should do that too,” Trump reportedly responded. “You are worse than I am.”

Indeed, when it comes to immigration policies it is difficult to say which country is worse – the US or Australia.

And perhaps it’s not surprising that the two countries are currently swapping refugees to dodge pressure at home and abroad by human rights organisations. The US is sending Central American refugees it has been holding in Costa Rica and accepting Middle Eastern refugees Australia has been holding in Papua New Guinea and Nauru.

The swap, along with the rest of their racist immigration policies, is a continuation of a settler-colonial pattern of engagement in the international community that both countries employ.

Both the US and Australia are settler societies which were founded on white supremacy and colonial expansionism. Hence, they are intrinsically concerned with maintaining dominance over Indigenous people and asserting state sovereignty against the incursion of people deemed “other”.

It is the source of their present-day prosperity and informs the way they both act to protect their borders.

In March this year Australian Minister for Immigration Peter Dutton told the media he wanted his department’s refugee programme to prioritise white farmers facing disadvantage in South Africa – a statement some saw as an echo of Australia’s past “whites-only” immigration policies.

Nikki Haley, US ambassador to the UN under the Trump administration, made almost identical comments late last year when announcing the US’ withdrawal from the Global Compact on Migration: “Our decisions on immigration policies must always be made by Americans and Americans alone […] We will decide how best to control our borders and who will be allowed to enter our country.”

While the immigration policy of many sovereign nations has some basis in such insider-outsider rhetoric, it is a particular hallmark of settler colonial states which over-state the belonging of their settler founders. The Indigenous peoples of the US and Australia had no such choice over the incursion of settlers when the nations were founded. As postcolonial theorist and anthropologist Ghassan Hage writes, this generates an approach to immigration that is best described as “the sensitivity of thieves”.

But apart from rhetoric, Australia and the US are also using colonial-era and colonial-like power relations to coerce poorer nations into serving their racist immigration policy.

Papua New Guinea has hosted hundreds of male refugees and asylum seekers who tried to make it to Australia on Manus Island, while children and families have been living in limbo in the island nation of Nauru.

This is the result of controversial deals Australia made with the two poorer nations, over which it has historically exercised dominance. Both nations were subject to Australian control for much of the last century. Papua New Guinea was a colony of Australia from 1905 to 1975. After World War I and the formation of the League of Nations, Nauru was administered under an Australian mandate.

So when Australia needed to simultaneously punish border crossers and save face in the international community, it was these states it turned to.

The Nauru detention centre operated between 2001 and 2008, under Howard who catalysed anti-immigrant sentiment in the wake of the 9/11 attacks in the US. It was opened again in 2012 by a Labor (previously in opposition to Howard’s Liberal-National Coalition) government. The Manus Island centre operated between 2001 and 2003 and was also re-opened in 2012.

And for the US, the situation is not that different. The success of the US’ draconian immigration policies is also heavily reliant on the cooperation of poorer countries in its region.

For example, it needs Mexico to detain Central American migrants before they reach the US border, and Costa Rica to provide temporary protectionfor them.

Mexico militarised its southern border with Guatemala in 2014 at the behest of the US, which provided the funds in order to “stem the tide”, as former President Barack Obama put it, of the unprecedented number of people fleeing gang and drug-related violence in Guatemala, Honduras and El Salvador.

Then in 2016, when the number of asylum seekers and migrants crossing the US-Mexico border went up again, the US turned to Costa Rica to screen, process and provide temporary protection to refugees.

Historical US dominance over Latin America is well-known and dates back to the 1823 Monroe Doctrine which defined the region as the “America’s backyard”. Then in 1904, President Theodore Roosevelt introduced a new policy which asserted the right of the US to exercise “international police power” in Latin America.

That approach of exploiting poorer nations to enforce cruel anti-immigration policies has also been adopted – perhaps unsurprisingly – by European countries. The EU has already considered the idea of establishing “processing centres” in North African countries (former European colonies) and has been also investing heavily in militarising borders in Libya and Niger.

Like the EU, the US and Australia have been spending billions to “contain” migration. In 2016 the Obama administration paid $75m towards a continued effort to fortify Mexico’s southern border. Detaining unaccompanied migrant children in “shelters” has reportedly cost the US taxpayers $1.3bn in 2018.

Meanwhile, Australia’s offshore detention of asylum seekers and refugees contributed $1bn to a total cost of more than $4bn for “border protection” policies in the last financial year.

This is not to mention the human cost – on the lives and bodies of those detained in their attempts to cross the border in search of greater security. Child sexual abuse, mental illness and medical neglect are endemic in the detention centres of Manus Island and Nauru and have resulted in murders and suicides.

Writing in The Huffington Post, the Kurdish journalist Behrouz Boochani, who has been held on Manus for five years, notes that, “since 2014, 12 asylum-seekers have died in these island detention centers”.

But amid the spending spree on militarisation and domination of poorer nations and the continuing misery and suffering of hundreds of thousands of people stranded at borders and in detention centres, there is rarely any recognition of the fact that these refugees and “migrants” have been in fact escaping wars and murderous regimes propped by the US, Australia and EU states.

And that is because these countries have never stopped behaving like colonial powers on the international stage, long after colonialism was supposed to have formally ended.

The views expressed in this article are the author’s own and do not necessarily reflect Al Jazeera’s editorial stance.