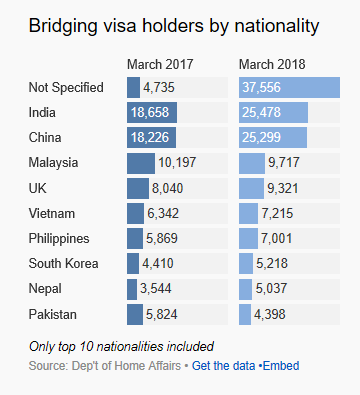 How should Australia cut immigration?

“Smoke and mirrors”. That’s the best way to describe the current state-of-play regarding Australia’s immigration debate from both major parties.

A new population policy that could produce sweeping changes to keep new migrants in regional Australia and improve the co-­ordination of infrastructure development to take account of growth trends is being developed by the Turnbull government.

The policy, slated to be released later this year, comes amid increasing backbench pressure for a firmer and more clearly articulated immigration policy, with MPs citing concerns in key Sydney and Melbourne electorates about the impact of population growth on quality of life.

Totally unmanageable, of course, without migrant proof fences and satellite tracking bracelets. Moreover, there was no mention of the surge in bridging visas by 40,000 over the past year (and 90,000 since 2014) as migrants await to hear their applications for permanent residency:

Not to be outdone, Labor over weekend took aim at the temporary migration system, claiming that ‘Mickey Mouse’ courses are undermining the student visa program:

Labor has signalled a tougher line on more than 500,000 overseas students who gain limited working rights when they come to Australia, raising the idea of halting “Mickey Mouse” courses that can be a pathway to entry.

In a significant warning on the migration intake, Labor employment spokesman Brendan O’Connor called for stronger integrity measures on the student program and was open to the idea of putting a cap on the intake.

“We need to see whether we could either cap the scheme or make sure it’s being used properly for the purpose it was intended,” Mr O’Connor said on Sunday.

He also raised the idea of putting curbs on working holiday-makers, a separate visa class with limited work rights and subject to a “backpacker tax” that triggered a political storm two years ago.

The number of overseas students in Australia reached 513,000 last September, up from 342,000 in the same month five years earlier, according to an analysis by the Parliamentary Library.

What few politicians can admit is just how hard it is to move the door and limit the migration intake, the biggest factor shaping the population. Without these facts, no promises matter.

Option one is to divide families. The family stream takes about 47,000 people, most of them spouses who come with their Australian partners. Are some of them to be turned away?…

Option two is to punish employers. The skilled stream takes about 111,000 people, a combination of workers sponsored by employers and those who come independently after proving they can fill a labour shortage. How low can this go?…

Option three is to turn away refugees. The humanitarian intake is 16,250 – and the only area in the population debate where political parties compete to go higher… 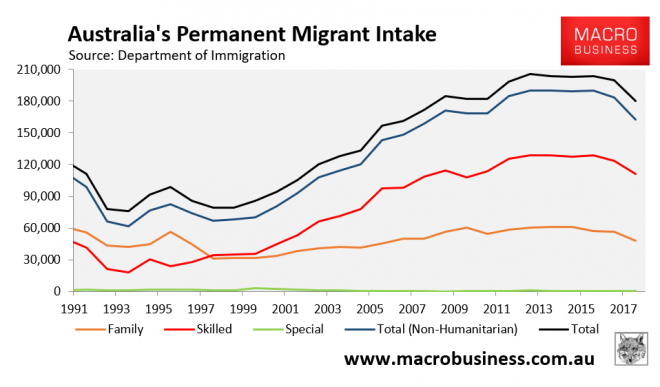 With regards to “option one”, the “family stream” (currently 47,000) could easily be sliced by several thousand by merely following through with the Productivity Commission’s (PC) recommendations and tightening parental visas. These migrants add pressure to an already strained system and do not work, pay taxes, or contribute in any meaningful way to the economy. According to the PC:

The contributory visa charge of just under $50 000 meets only a fraction of the fiscal costs for the annual intake of roughly 7200 contributory parents. And an additional 1500 parents make a minimal contribution. Overall, the cumulated lifetime fiscal costs (in net present value terms) of a parent visa holder in 2015-16 is estimated to be between $335 000 and $410 000 per adult, which ultimately must be met by the Australian community. On this basis, the net liability to the Australian community of providing assistance to these 8700 parents over their lifetime ranges between $2.6 and $3.2 billion in present value terms. Given that there is a new inflow each year, the accumulated taxpayer liabilities become very large over time. This is a high cost for a relatively small group.

Ultimately, every dollar spent on one social program must require either additional taxes or forgone government expenditure in other areas. It seems unlikely that parent visas meet the usual standards of proven need, in contrast to areas such as mental health, homelessness or, in the context of immigration, the support of immigrants through the humanitarian stream, and foreign aid.

Given the balance of the costs and benefits, the case for retaining parent visas in their current form is weak.

Nobody should migrate to Australia with the expectation that they can bring their elderly parents along for the ride at taxpayers’ expense.

“Option two” is where the majority of the cuts to Australia’s immigration intake should take place. At the turn-of-the-century, the “skilled” intake was 35,000. Today it is 111,000 following the Coalition’s latest cuts.

We already know that the common claim by the business lobby that Australia is suffering from “skills shortages” is utterly false. We also know that Australia’s skilled migrant program has been widely rorted, attracting migrants to areas already heavily oversupplied with workers (e.g. accountanting, engineering and IT), with most of these migrants employed at levels well below their claimed skills set, and ‘skilled’ migrants generally having significantly higher unemployment and underemployment than the Australian born population:

Therefore, the ‘skilled’ program should be phased back to 35,000 over, say, three years and be reserved only for truly world-class leaders in their field that Australia cannot foster internally. Moreover, these highly skilled migrants should have an income pay floor set at the 80th to 90th percentile of earnings.

No longer should employers simply be able to ‘grab a migrant’ to fill ordinary positions in the labour market cheaply. Instead, they would have to lift wages to attract workers (thus countering anaemic wages growth), as well as commit to training local workers.

Let’s also not forget that many migrants come to Australia on temporary visas with the hope of transitioning to a ‘skilled’ permanent visa.

Therefore, if Australia was to remove the carrot of permanent residency by slashing the ‘skilled’ intake, it would also reduce the flow of temporary migrants, since the two areas are intrinsically linked.

The flow of temporary migrants would also be stemmed by raising the appallingly low pay floor on ‘skilled’ temporary workers from $53,900 (non-indexed) to, say, the full-time average salary of $84,682 (which includes unskilled workers).

By maintaining such a low pay floor for temporary ‘skilled’ foreign workers, the government has ensured the system has been overused and abused by employers, thereby undermining the pay and working conditions of local workers. This needs to stop.

Moving on to “option three”, Australia’s humanitarian intake is already fairly low and has not budged much since the turn-of-the-century (see above chart). At a minimum, the humanitarian intake should remain at the current level and could even be increased a little without adding unduly to population pressures.

In summary, by merely cutting parental visas by at least 5,000, and culling the skilled migrant intake by 76,000, Australia could easily reduce the permanent migrant intake back to around 100,000, which includes maintaining a generous humanitarian intake.

In any event, Australians should be given a say about Australia’s future population size via a plebiscite at the upcoming federal election, the answers of which would then be used to formulate Australia’s immigration intake to meet the said target.

Things to plan before moving to Australia| Expenses in Australia| Immigration

A History of Immigration in Australia