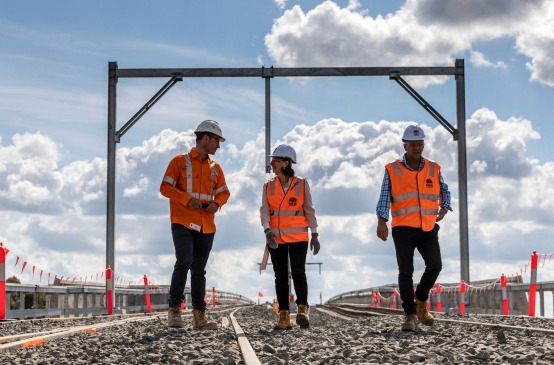 Australia is in the middle of a population boom – and a catch-up infrastructure boom that is trying to manage it. The immediate task is to manage the pressures of the here-and-now boom that is littering the CBDs of our major cities and their suburbs with construction work and delays. In the short term, this is adding to the congestion the new rail lines and roads aim to ease. And this is fuelling simmering popular opposition to population growth running at 1.6 per cent – or more precisely immigration growth – and this time as much on the populist right as on the environmental left. So the related task is to press ahead with policy reforms that draw on the lessons learned.

With this backdrop, Infrastructure Australia’s new report, simply titled Making Reform Happen, will be launched at the fourth Financial Review National Infrastructure Summit by its new chairwoman, Julieanne Alroe, today. In it is a program that any good federal Liberal government should be pursuing. The report proposes to rationalise and make more efficient the provision of infrastructure, how it is paid for and proposes to make incentive payments to the states to get political  support for the reforms. It reasons that such payments – containing elements of the successful Abbott-Hockey asset recycling program, and elements of the early 1990s Hilmer National Competition Policy payments – are not handouts, but a fair recognition of the central problem with the commonwealth’s so-called vertical fiscal imbalance: that Canberra gets the revenue benefits from higher population and better infrastructure, while the states wear the costs.

The mining boom supercharged Australian prosperity, and in doing so kicked off a large inflow of immigration. That spurt of new people meant that a low birth rate worried about in Peter Costello’s first intergenerational report in 2002, has been rendered irrelevant. It predicted a 23.2 million-strong nation by 2022. Australia hit that number in 2013, is now nudging 25million, and will likely hit 30 million by 2031. This bigger Australia is now even at the point where it is starting to spill out of capitals and into rural Australia. We report today that rural shopping centres in NSW are in the middle of an investment boom. And the nature of the migration is also telling: some 3.5 per cent of Australia’s population is now foreign students, as our export education market continues to grow and thrive.

This immigration boom is good for Australia. We are a frontier economy, not a growth-constrained Europe, and attracting new, talented people adds to our national prosperity. But better infrastructure is needed to help reap the true productivity benefits from this boom, which has helped drive the economy and a record 400,000 new jobs last year.

That’s where Infrastructure Australia comes in: it has proposed a series of incentive payments to get states on board for what it sees as reform priorities. First, all current road user charges and fuel excise should be scrapped in favour of a heavily user-pays set of charges based on tolls and congestion charges. This would much more efficiently price roads and send clear signals about what people are prepared to pay for. Two weeks ago, Productivity Commission chairman Peter Harris even nominated lack of a comprehensive road-pricing system as “the greatest area of failure of my time in infrastructure”. Second, all current stamp duty and land charges should be replaced with a land tax. That would help to drive the most efficient uses of land, and stop discouraging labour mobility. Third, public transport should be franchised out to private providers who tender for multi-year contracts to run, say, the trains. That would end the monopolies of state-run transit systems. And fourth, urban water infrastructure needs to have better price signals introduced, as well as undergoing a lot of outsourcing, privatisation and public private partnerships. It is not a set of recommendations for the political faint-of-heart.

Australia really needs to sort its infrastructure priorities out. High migration rates, coupled with the reality of a high standard of living, has been crucial to our social success. Good infrastructure policy is a prerequisite for that to continue.