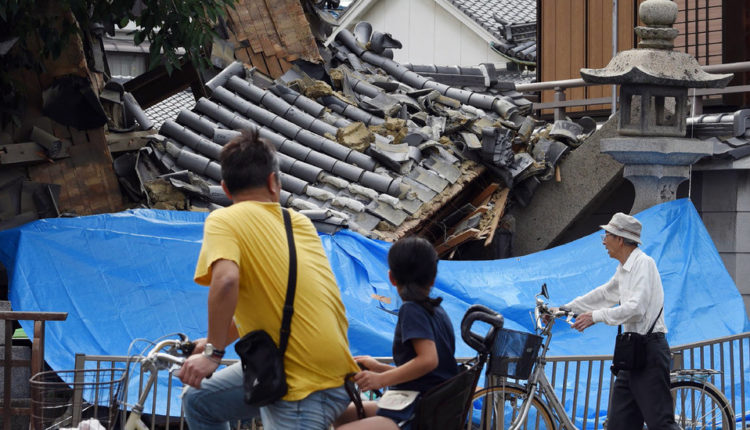 (Want to get this briefing by email? Here’s the sign-up.)

Good morning. Earthquake in Japan, showdown in Washington and tough match for South Korea. Here’s what you need to know.

• “They could be murderers and thieves and so much else.”

President Trump defended his administration’s policy of separating children from their parents at the border with Mexico, but also sought to blame Democrats for the practice.

The public outcry against the policy has grown intense, including the voices of the former first lady Laura Bush and top members of Mr. Trump’s own party. The U.N. human rights chief on Monday condemned the practice as abuse.

The Senate voted to restore penalties on ZTE, the Chinese telecommunications giant that violated American sanctions.

That may set off a battle with the White House, which has signaled that it will fight to keep the lifeline President Trump extended to the company.

Meanwhile, we analyzed the escalating trade battle between the U.S. and China. We found that Americans will soon be paying more for a wide variety of Chinese-made products, while China will see little impact on its nearly $13 trillion economy. Above, an electronics worker in Shandong Province.

In Washington and Beijing, Apple’s chief executive, Tim Cook, has been acting a lot like the tech industry’s top diplomat.

• Japan is warning those in the Osaka area to be prepared for strong aftershocks after a 6.1-magnitude earthquake struck north of the city on Monday morning. At least three people were killed and more than 217 injured.

The local public broadcaster said the dead included a 9-year-old girl who was crushed by the collapsing wall of a swimming pool at an elementary school. The other two casualties were men in their 80s.

Train service across western and central Japan was disrupted on Monday, and highways closed, but airports operated as usual.

• In the Philippines, an order to deport an Australian nun was stayed.

And Australia remembered Eurydice Dixon in ceremonies across the country. The grisly rape and murder of the 22-year-old aspiring comedian have reignited a national conversation about violence against women.

• Turkey’s president, Recep Tayyip Erdogan, hopes to raise a “pious generation” by opening thousands of religious schools, even as standards slip in public ones. Mr. Erdogan is seeking re-election on Sunday. [The New York Times]

• China is expanding its nuclear arsenal, a new report said, increasing its number of nuclear warheads by 10 this year, to 280. (The U.S. has approximately 6,450.) [South China Morning Post]

• Two Filipinos convicted in the 2012 killing of a U.S. Marine were captured in Manila after years of avoiding prison time. The U.S. Embassy said that the new arrests had brought “some measure of justice to this senseless crime.” [The New York Times]

• In Indonesia, dozens of passengers are still missing after a ferry sank in Lake Toba, a popular tourist site. At least 18 people were rescued and one was confirmed dead among about 80 passengers. [Reuters]

• Iran executed a man by hanging, three months after he was convicted of using a bus to run over and kill three police officers during a protest by Gonabadi Dervishes, followers of a mystical Sufi strain of Islam. [The New York Times]

• Trump administration cutbacks have left some U.S. prisons short on correctional officers, requiring support workers like teachers and secretaries to step in. [The New York Times]

Tips, both new and old, for a more fulfilling life.

• A new view of old trees. (Very old trees.) After a three-year, $40 million restoration project, a grove of giant sequoias in Yosemite National Park has reopened. Here’s our report, complete with breathtaking photographs.

• Two decades ago, a professor was determined to rectify the publication errors in prior versions of “Ulysses,” the famously abstruse James Joyce novel. Then he vanished. The Times Magazine made a surprising discovery about his disappearance.

• And the possibility of video game addiction has the World Health Organization worried. The U.N. health body is adding “gaming disorder” to its compendium of medical conditions.

“The time has come for equality of opportunity in sharing in government, in education, and in employment. It will not be stayed or denied. It is here!” the Republican leader of the U.S. Senate, Everett Dirksen, said to a packed chamber.

Just over a week later, on this day in 1964, the Senate passed the Civil Rights Act — one of the most momentous pieces of legislation in the country’s history.

Drafted by President John F. Kennedy and pressed after his assassination by President Lyndon Johnson, the bill made many forms of discrimination illegal at the federal level. The central issue was race.

The measure had to overcome overwhelming opposition by Democrats from the South, where racist policies had been enshrined in law for decades after the end of the Civil War and the banishment of slavery.

Senator Sam Ervin of North Carolina insisted that “no men of any race can legislate their way to a more abundant life,” and that “they must earn such a life by their own achievements, sacrifices, and exertions.”

The bill prevailed. The Senate vote, 73 to 27, cleared the way for final congressional approval. President Johnson signed the act into law on July 2, with the Rev. Dr. Martin Luther King Jr. in attendance.

Your Morning Briefing is published weekday mornings and updated online. Sign up here to get it by email in the Australian, Asian, European or American morning. You can also receive an Evening Briefing on U.S. weeknights.

And our Australia bureau chief offers a weekly letter adding analysis and conversations with readers.