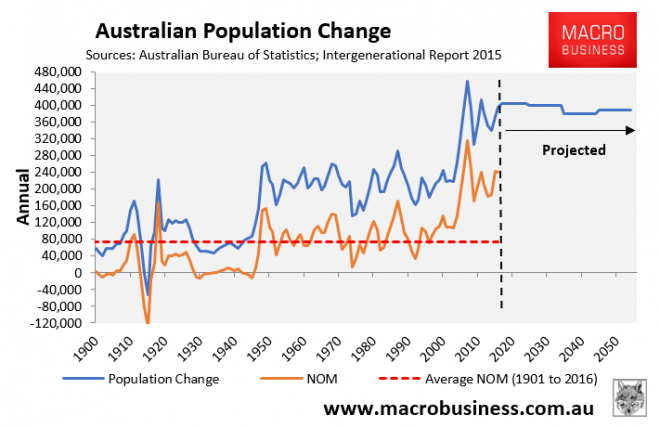 After Fraser Anning’s idiotic speech last week, I was concerned that the immigration debate would be silenced by the elite and Fake Left’s outcry of ‘racism’, thereby preventing much needed discussion about the real issues of infrastructure, housing, the environment, and general liveability.

My concerns have been proven wrong, however, with the immigration debate quickly returning to the centre, in part scared sensible by Anning’s lunacy.

The day after Anning’s speech, The Australian’s Chris Mitchell called for a thorough and sensible debate on immigration that focuses on living standards:

Both sides of politics, the federal Treasury, the Reserve Bank and most tertiary institutions have a vested interest in population growth. It is so much easier than improving labour market productivity or governing smarter…

Polling shows concern is rising at the overcrowding effects of population growth — most of it in Sydney and Melbourne — and up to 64 per cent would support a slowdown in immigration, according to Essential Research. The Australian’s Newspoll in April put the figure at 56 per cent…

These people live in suburbs that bear the brunt of overcrowding because they cannot afford the more salubrious areas inhabited by the finger-wagging knowledge classes of media, politics and tertiary education.

As a migrant myself, I am immensely grateful for the opportunities I have received — and like many others, mindful of the enduring responsibility to my adopted home.

But the best way of preserving those benefits is to ensure the migration program remains within sensible bounds.

As things stand, there is an overwhelming case for cutting net overseas migration from last year’s 262,000, which is very close to the annual number of live births, to about 100,000 annually, while reducing the intake of international students at least proportionately.

The alternative is simply to allow the costs to accumulate and the resentments to fester. If the goal is to create real xenophobia, it is hard to think of a surer way of achieving it.

As did Stephen Koukoulas (aka ‘The Kouk’):

The wonderful 27 year GDP growth record of Australia and Dr Lowe’s assessment about the desirability of high levels of immigration are, to a significant extent, simply a reflection of more people being here…

It doesn’t automatically mean that everyone is better for this extra GDP. There is nothing clever or innovative about it.

Australia’s GDP enhancing high population growth is coming at a cost of things not well captured, if at all, in the GDP data or measures of individual well-being.

Missing are things like the time spent sitting in congested traffic in competition with other drivers trying to go to work to earn the money to service a massive mortgage that is needed because of strong demand for housing from hundreds of thousands of new immigrants pushing prices higher. These are the consequences of population growth outpacing the supply of houses, transport, other infrastructure and social services.

The unmeasured but still very real costs of a shortfall in funding for schools and health care facilities, that are stretched as more and more people compete to use those services relative to the ability of the government or private sector to ramp up supply of those services are other costs…

In a decade or so from now, Australia’s population will likely rise to 30 million or so, from today’s level around 25 million. These extra people will, undeniably, add to GDP and growth through their work and spending patterns.

But how will the economy cope with these 5 million extra people, competing to use the same roads, buses and trains and competing to buy or rent the stock of dwellings?…

Suffice to say, there is a case at the moment for trimming the rate of population growth to allow for the infrastructure to catch up to the number of people living here. This might mean a scaling back in various components of the current level of immigration, excluding the humanitarian intake for what should be obvious reasons…

Whereas over the weekend, Fairfax’s front page featured an article by Royce Millar and Ben Schneiders calling for a sensible immigration debate:

Like so many in Australia’s burgeoning major cities, Ray is increasingly of the view that current levels of population growth are too great.

“The roads and public transport are showing clear signs that we can’t cope with this growth, especially in the western suburbs.”

Are there too many people? “Yes,” she says.

Ray is no raving racist or environmental warrior. She just wants to get to work in reasonable time.

She is one of many daily grappling with the reality of the unprecedented population growth that has seen Australia’s population hit 25 million, decades ahead of earlier projections. More than half that growth has been in Sydney and Melbourne…

But in our public debate, such frustrations about population and planning tend to get conflated with arguments about race, religion and refugees…

…It’s in this context that we are belatedly acknowledging a problem that has been obvious too many for decades. It’s not an ideological issue: it’s simply that our cities are buckling under the pressure especially in housing and transport.

Yet nobody from the sensible centre – be it MB, Dick Smith, Sustainable Australia, or others – is demanding that immigration be cut to zero, but merely returned towards the historical average of 70,000 people a year, which served this nation so well in the hundred years following Federation, precisely because this level of immigration could be absorbed:

A positive rate of immigration that is within Australia’s absorptive capacity and oriented towards young and skilled immigrants is likely to deliver net benefits to the Australian community over the long term.

However, there are various weaknesses inherent in current processes surrounding immigration policy decision making, particularly in terms of their ability to take into account broader and longer-term considerations (chapter 3 and finding 3.1).

Taken together, these issues raise questions as to whether, without changes to increase Australia’s absorptive capacity, the annual intake (which is currently at
historically high levels) is consistent with achieving a population that at least sustains (and over time maximises) the wellbeing of the Australian community.

Immigration is a numbers game and nothing else. Thankfully, the Australian mainstream media has proven this week that a sensible debate is still possible, despite the race baiting by extremists from both sides.

How I apply Schengen Visa in Dubai