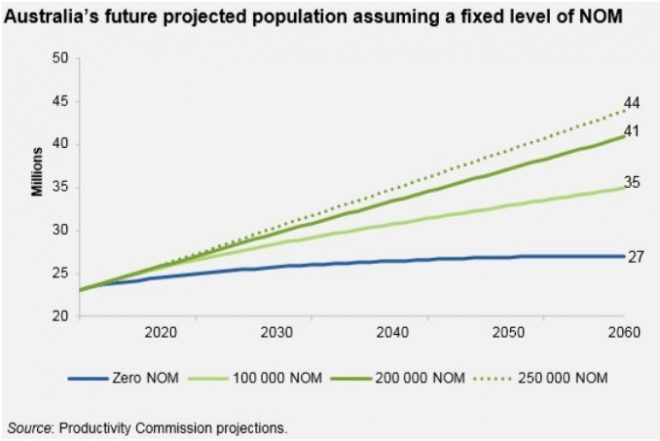 Back in June, Kerin penned a ridiculous article in The Australian claiming that “immigration is the golden goose our economy needs” and spun a bunch of spurious ‘benefits’ that arise from mass immigration without any consideration of the costs. I comprehensively destroyed Kerin’s arguments, which you can read here.

Today, Kerin has penned an article finally acknowledging the huge congestion costs arising from mass immigration, but then claiming the problem can be easily fixed by congestion charging:

Tudge ruled out congestion pricing, saying it “disadvantages people in the outer suburbs”. But congestion hurts them more.

Kerin’s claim that “vast majority of big city congestion is caused by the daily activities of existing residents… not by recent migrants” is ridiculous, given immigration is the fundamental driver of population growth.

The Productivity Commission’s Migrant Intake Australia report illustrated this point well. As shown in the next chart, Australia’s population would only grow to 27 million people by 2060 with zero net overseas migration (NOM) versus more than 40 million under current mass immigration settings:

In a similar vein, under current mass immigration settings, Sydney’s population is projected to grow by 1.74 million people in the 20 years to 2036, with 1.52 million of this growth coming from NOM:

Kerin can bang on about congestion pricing all he wants. But the fact of the matter is that it won’t magically create more road space to cater for the ballooning population, nor will it magically fix our congested and deficient public transport networks. All it will do is give people less choice, especially those living in outer suburban areas like Western Sydney. They will simply pay more for less amenity, as they have experienced with the proliferation of toll roads.

Blind Freddy can see that the simplest and best solution to mitigate the liveability problems afflicting our major cities is to lower immigration back to historical levels (see next chart) and prevent the pressures from building in the first place.

Policy makers cannot possibly hope to ameliorate the many problems caused by excessive population growth while continuing to run an immigration program that is roughly triple the historical average.

What Is The E Visa Australia?