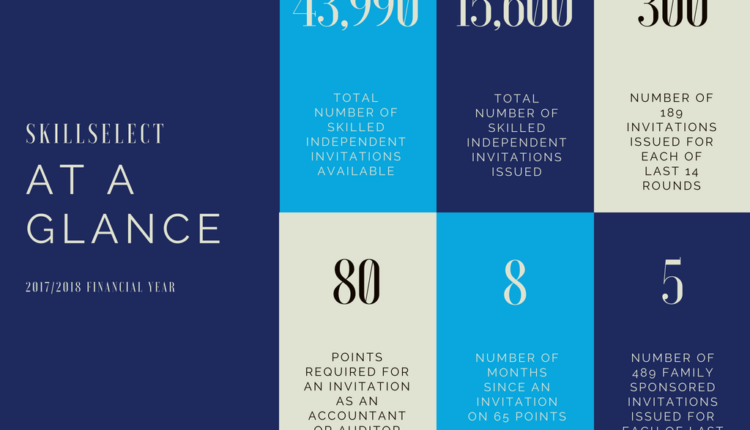 The final invitation round results for the 2017/18 program year have just been released, completing the picture of what was surely an interesting year for the skilled migration program.

The number of invitations issued in this round was on trend from the last 14 rounds; 300 for Skilled Independent (SC189) visas and 5 for Skilled Regional (SC489) family-sponsored visas. The minimum points required for an invitation for the SC189 remained at 75, whilst 80 points would be required to score an invitation for a SC489.

The last time an invitation was issued for an EOI on 70 points was the 18 April invitation round.

If you were an Accountant or Auditor, you needed at least 80 points to receive an invitation. Whereas if you were an Electronics Engineer, ICT Business Analyst or Systems Analyst, Programmer, or other computer professional, you would need at least 75 points to get through.

The 2017/18 Migration Program Planning Levels stated that there were 43,990 places available for Skilled Independent applicants. The total amount of invitations that have been issued for the same time frame was only 15,600, leaving 28,300 places in the abyss. As Helen previously contemplated in her earlier blog, this gap could be due to the introduction of the SC189 pathway for New Zealand citizens which was introduced in July 2017.

What will the 2018/19 program hold for applicants? The only thing we know is that the planning levels are exactly the same to the 2017/18 program, meaning there is likely to be not much change at all. Only time will tell.

How Much Does It Cost For A Visa?