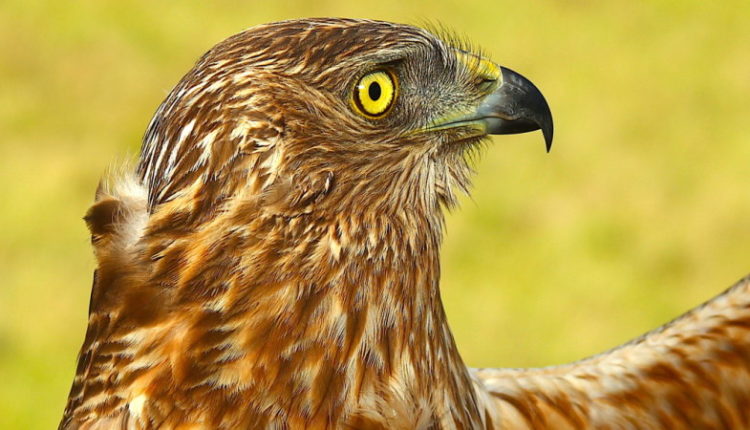 They’re a rare sight in the ACT, and now we know where these birds go

Jerry Olsen, from the University of Canberra’s Institute for Applied Ecology, said Harry had travelled to central Queensland in both winters since being fitted with the tracker.

“This is his second trip to Rockhampton and he just hangs around town, which is really quite strange because he’s in a wild area at Gudgenby [in Namadgi National Park],” he said.

“He nests at altitude in the wilderness and then he winters almost on the edge of the city limits on the Fitzroy River at sea level.”

“What this tells us is that there’s more migration going on than we realise,” he said of the tracking data.

“Often, we don’t see Australia as being a place where you’ve got a clear migration like you have through the straits of Gibraltar in Europe, or through the eastern sea coast in America where you can watch thousands and thousands of birds.

“Here, they’re sort of dispersed in the way they migrate.”

While Harry spends most of his time in Namadgi and Rockhampton, the tracker shows he doesn’t make a beeline for those destinations on his travels.

He goes to higher ground in search of food near Cabramurra and Tantangara in the Snowy Mountains when he first leaves the Namadgi breeding site.

He stops at particular farms while travelling in both directions between Queensland and the ACT, and sets up a territory near the Snowy River just before coming back to his nest site.

He travelled at a maximum speed of 82 kilometres per hour along the way, and climbed as high as 1320 metres above sea level, according to the tracker.

Mr Olsen said Harry had returned to Rockhampton in February this year, and by August the research team, which also includes independent ornithologist Susan Trost, would know whether he was coming back to breed in Namadgi again.

“I suspect he will because it seems to be a fixed circuit; a fixed migration,” he said.

Mr Olsen said the researchers had feared a lack of water and plant growth at Gudgenby may have an impact on swamp harriers’ ability to breed in Namadgi National Park.

Despite the drought, Harry surprised them by still fledging one young earlier this year before leaving for Queensland.

Mr Olsen said swamp harriers were a polygamous animal and one male usually served two females, but Harry was part of an unusual trio consisting of two males and a female.

“We didn’t know how they would go [in the drought], but they did alright,” he said.

Blake Foden is a reporter at the Sunday Canberra Times. He has worked as a journalist in Australia, New Zealand and the UK.