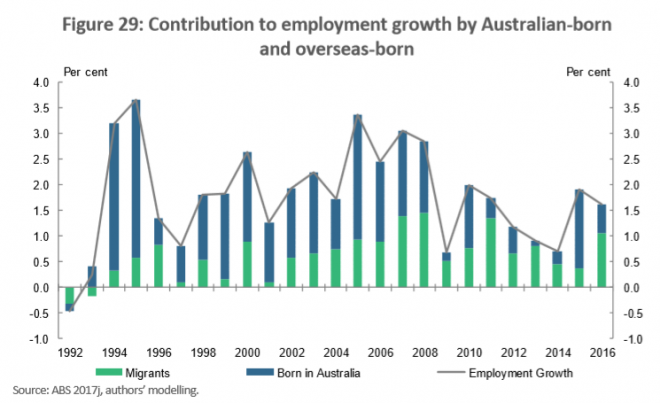 Back in April, the Australian Treasury and the Department of Home Affairs released a joint propaganda report, Shaping a Nation, spruiking mass immigration and a ‘Big Australia’, which was widely debunked by economists.

Today, The Australian’s Higher Education Editor, Tim Dodd, has used this report to argue that immigration is not lowering Australian wages growth:

Five out of six international students do not remain in Australia but leave for opportunities elsewhere, according to official visa data.

The figures, published by the federal government earlier this year, also cite several studies of census and other data that found workers from overseas have no negative impact on employment or wage levels in Australia, including among youth and the low skilled…

In the run-up to this weekend’s Super Saturday by-elections, federal Labor has tried to tap into fear about international students taking jobs…

Mr O’Connor said that given the massive growth in international student visas it was clear “there are circumstances where people are coming only to work”.

“Why do we allow the overuse and abuse when we know youth unemployment is more than 11 per cent?” he asked.

Tim Dodd needs to take a long hard look at the evidence.

Even Treasury’s propaganda report admitted that most new jobs created in Australia have gone to migrants:

It’s not hard to see why. As reported by MB over many years, foreign students are at the pointy end of the systemic wages fraud that has taken place, including:

Clearly, young Australians are being crushed by increased competition for jobs, lower wages, as well as upward pressure on house prices in the migrant hotspots of Sydney and Melbourne. Meanwhile, the rest of us living in the major cities are suffering from worsening congestion, ever-rising infrastructure charges, and declining liveability as the population swells year after year.

The reality is that Australia’s education system has become an integral part of the immigration industry and Australia’s population ponzi – effectively a way for foreigners to buy backdoor permanent residency to Australia.

Dr Jenny Stewart, Honorary Professor of Public Policy at the University of New South Wales, drew the direct link between permanent residency and foreign student demand in her excellent article Hooked on Students:

If you work in a university, you cannot help but be aware of the extent to which universities are dependent upon income from international undergraduate students. Many of us working in the sector realised that it was not for any intellectual brilliance on our part that the students came, but because for many, coming to Australia as a student was a significant step on the path to becoming an Australian resident…

What do these undergraduate students do once they have completed their qualification? Many, understandably, wish to remain in Australia…

With appropriate advice and support and the necessary persistence, it would seem to be possible for just about any international student who is a graduate of an Australian university to become, eventually, a permanent resident…

We need to switch the education sector from citizenship to pedagogical exports. If permanent migration is capped, many more students will go home. The economy will adjust quickly with lower house prices and a lower Australian dollar. Thus the students will still come in droves for the value offered in Australian degree but without being so detrimental to wages, house prices and crush-loaded public services.