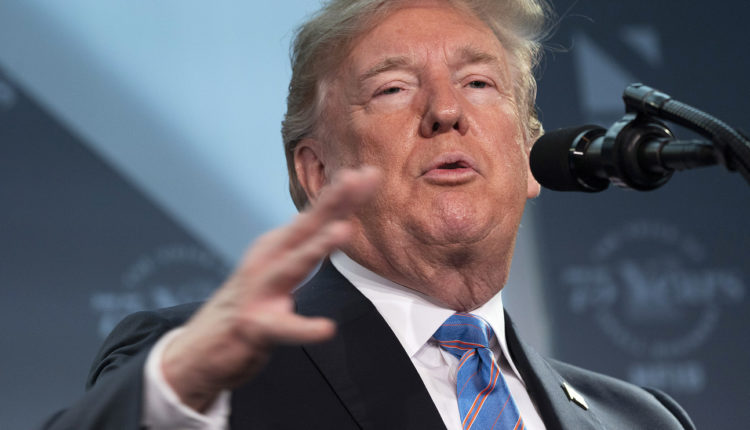 President Donald Trump charged Democrats with wanting illegal immigrants to “infest” the U.S., as he defended his administration’s policy of separating migrant families at the border and spoke to a business group.

‘DEMOCRATS ARE THE PROBLEM’

As Trump continues to face outrage over his administration’s separation policy, he said “Democrats are the problem” and that “we must always arrest people coming into our Country illegally.”

Trump has called on Democrats to work with Republicans to pass immigration legislation, and said on Twitter, “They don’t care about crime and want illegal immigrants, no matter how bad they may be, to pour into and infest our Country, like MS-13.” Trump is heading to Capitol Hill to meet with Republicans on immigration.

He also again said crime in Germany is up — something that country’s own statistics do not show.

Crime in Germany is up 10% plus (officials do not want to report these crimes) since migrants were accepted. Others countries are even worse. Be smart America!

Democrats are the problem. They don’t care about crime and want illegal immigrants, no matter how bad they may be, to pour into and infest our Country, like MS-13. They can’t win on their terrible policies, so they view them as potential voters!

#CHANGETHELAWS Now is the best opportunity ever for Congress to change the ridiculous and obsolete laws on immigration. Get it done, always keeping in mind that we must have strong border security.

Trump addressed the National Federation of Independent Business, a day after he asked his administration to identify $200 billion in imported goods from China to be hit with tariffs. Trade-war fears stoked a drop in U.S. markets


on Tuesday — but Trump adviser Peter Navarro told reporters the tariffs would be “ultimately bullish” for U.S. corporations and workers.

“We’re going to make it fair,” Trump said about trade with China and other countries.

Also read: China can’t match Trump in a tariff fight, but it does have other weapons.

He also discussed his tax-cut law and doubled down on his immigration policies, but told the group he wants authority to detain and remove illegal immigrant families “as a unit.” He said he plans to make changes to Republican immigration legislation.

The president also welcomed Spain’s King Felipe VI and Queen Letizia to the White House, and said Spain and the U.S. have an “excellent trade relationship, military relationship. Just about everything you can have.” The king was expected to discuss European concerns about the Trump administration’s tariffs on steel and aluminum imports.

tourist visa to australia from turkey

Step by step guide to submit an Expression of Interest