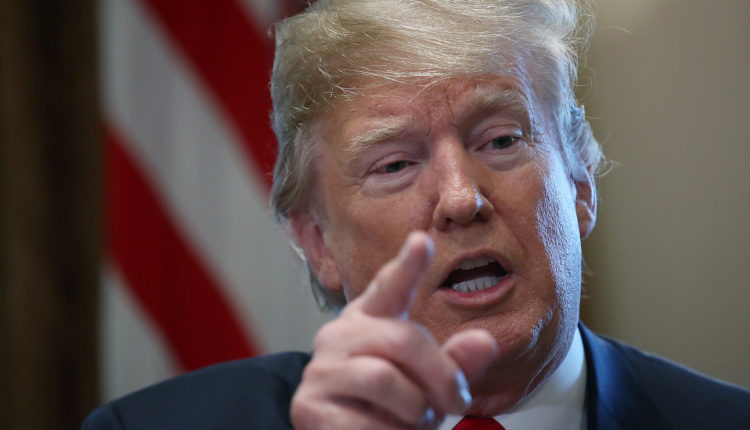 President Donald Trump threatened Friday to place tariffs on European cars, as he told congressional Republicans to stop “wasting their time” on immigration until after the midterm elections, and urged OPEC to boost oil production.

Trump made his latest tariff threat against European-made cars on Twitter, following the European Union’s imposition Friday of 25% tariffs on more than $3 billion worth of U.S. goods.

“Based on the Tariffs and Trade Barriers long placed on the U.S. and [its] great companies and workers by the European Union, if these Tariffs and Barriers are not soon broken down and removed, we will be placing a 20% Tariff on all of their cars coming into the U.S.,” the president tweeted. “Build them here!”

The tariffs put in place Friday by the EU were in response to Trump’s slapping tariffs on aluminum and steel imports. Shares of German auto makers BMW

Also read: Why a major trade war could mean a ‘full-blown recession.’

BACK OFF ON IMMIGRATION, TRUMP TELLS GOP

Trump said Republicans in Congress should stop “wasting their time” on immigration policy until after November’s midterm elections, when he predicted the GOP would pick up more seats.

It was the second time in two days he has been publicly at odds with Republicans over immigration. On Thursday, he questioned why the party was going ahead with votes amid dim prospects for passing legislation. Late Thursday, House Republican leaders said they were putting off until next week a vote on a bill that offers a pathway to citizenship for young undocumented immigrants known as dreamers. It also would provide $25 billion for Trump’s proposed border wall. At an event with so-called angel families who have lost loved ones to violence carried out by undocumented immigrants, Trump said “we will secure our borders.” Research has shown undocumented immigrants are less likely to commit crimes than native-born citizens.

Trump said on Twitter, “we can pass great legislation after the Red Wave!” Last week, analysts at Goldman Sachs said in a note that they believe odds of Democrats winning the House majority are around 60%.

Republicans should stop wasting their time on Immigration until after we elect more Senators and Congressmen/women in November. Dems are just playing games, have no intention of doing anything to solves this decades old problem. We can pass great legislation after the Red Wave!

Elect more Republicans in November and we will pass the finest, fairest and most comprehensive Immigration Bills anywhere in the world. Right now we have the dumbest and the worst. Dems are doing nothing but Obstructing. Remember their motto, RESIST! Ours is PRODUCE!

Even if we get 100% Republican votes in the Senate, we need 10 Democrat votes to get a much needed Immigration Bill – & the Dems are Obstructionists who won’t give votes for political reasons & because they don’t care about Crime coming from Border! So we need to elect more R’s!

As the Organization of the Petroleum Exporting Countries met in Vienna, Trump tweeted, “Hope OPEC will increase output substantially. Need to keep prices down!”


prices rallied as the cartel agreed to boost output.

Trump has taken aim at OPEC before, but it’s unclear what his complaints can accomplish.

Read: Why Trump is tweeting about OPEC — and what he can do about oil prices.

Which Countries Do I Need A Visa For With A British Passport?