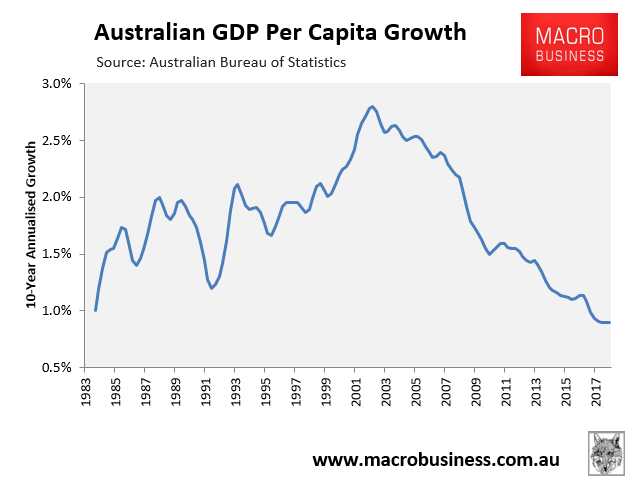 Prime Minister Malcolm Turnbull is set for a showdown with Western Australian Liberal MPs over their push to halve Australia’s immigration intake:

The WA Liberals are likely to back a policy push at the party’s State conference for the Government to make big cuts to the immigration rate, reducing the current cap of 190,000 permanent migrants a year to half that figure.

The Prime Minister will be in Perth on August 10 and 11 to attend the annual meeting. The push for the cut is understood to have broad support from party members…

Mr Turnbull and Treasurer Scott Morrison have talked down suggestions Australia needs to tighten immigration numbers, arguing immigration has played a major role in the economic growth of the country and would continue to do so.

…senior business figures have urged the Government to maintain immigration numbers to support investment and jobs.

This week, Wesfarmers chief executive Rob Scott said migration was was a key factor in Australia’s high level of economic growth over the past 27 years.

Senator Smith says he does not want to see Perth go the way of cities such as Sydney and Melbourne, where infrastructure had not kept up with big jumps in population.

Moreover, as noted by the Productivity Commission, GDP is a “weak” measure of “wellbeing” because it does not take into consideration the negative externalities associated with high immigration-fuelled population growth, such as increased traffic congestion, having to live in smaller and more expensive housing, more expensive infrastructure, environmental degradation, etc:

“While the economywide modelling suggests that the Australian economy will benefit from immigration in terms of higher output per person, GDP per person is a weak measure of the overall wellbeing of the Australian community and does not capture how gains would be distributed among the community. Whether a particular rate of immigration will deliver an overall benefit to the existing Australian community will crucially depend on the distribution of the gains and the interrelated social and environmental impacts…

Immigration, as a major source of population growth in Australia, contributes to congestion in the major cities… A larger population inevitably requires more investment in infrastructure, and who pays for this will depend on how this investment is funded (by users or by taxpayers). Physical constraints in major cities make the costs of expanding infrastructure more expensive, so even if a user-pays model is adopted, a higher population is very likely to impose a higher cost of living for people already residing in these major cities…

Urban population growth puts pressure on many environment-related resources and services, such as clean water, air and waste disposal. Managing these pressures requires additional investment, which increases the unit cost of relevant services, such as water supply and waste management. These higher costs are shared by all utility users.

Blind Freddy can see that Australia’s immigration is way too high, running at roughly triple the historical average:

Malcolm Turnbull should listen to his Western Australian counterparts and slash immigration. Otherwise he faces annihilation at the ballot box as traditional Coalition voters continue to defect to One Nation.

What Is Sponsored Visa In Australia?