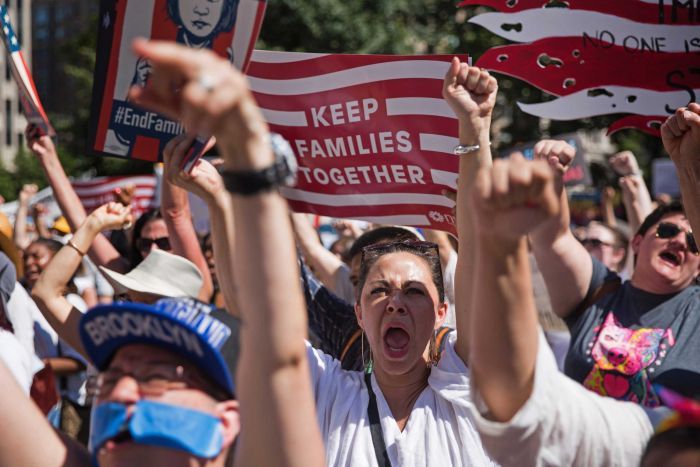 Photo:
Many joined the rally after hearing accounts of children forcibly taken from their families as they crossed the border illegally. (AP: Kevin Hagen)

Tens of thousands of protesters across America — moved by accounts of children separated from their parents at the US-Mexico border — have marched in major cities and tiny towns to demand President Donald Trump’s administration reunite the divided families.

More than 700 marches drew tens of thousands of people across the country, from immigrant-friendly cities like Los Angeles and New York to conservative Appalachia and Wyoming under the banner Families Belong Together.

Crowds dressed in white and gathered early on Saturday morning (local time) in sweltering 32-degree heat in Lafayette Park across from the White House in what was expected to be the largest of the day’s protests. 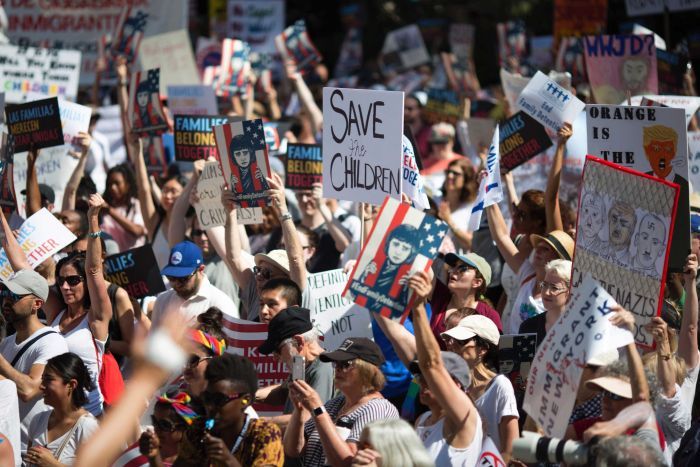 Photo:
Hundreds of thousands of people across the country were expected to join in the rallies. (AP: Kevin Hagen)

“I care, do you?” read another, referencing a jacket the first lady wore when visiting child migrants amid the global furore over the administration’s zero-tolerance policy that forced the separation of more than 2,000 children from their parents.

Her jacket had “I really don’t care. Do you?” scrawled across the back, and that message has become a rallying cry for Saturday’s protesters.

“We care!” marchers shouted outside city hall in Dallas. 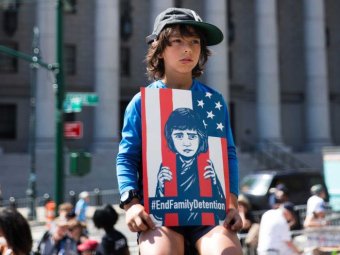 Photo:
Protests were held in at least 703 locations across the country. (AP: Kevin Hagen)

Marchers carried signs that read “Compassion not cruelty” and “November is coming”.

In New York City, thousands began chanting “shame” and singing “shut detention down” before their planned march across the Brooklyn Bridge.

Smaller groups came together in city parks and downtown squares in every state, a total of 703 places across the country, and photos quickly started ricocheting around social media.

“What if it was your child?” was written on one. “No family jails,” said another.

A little girl in Washington, DC, carried a handwritten sign: “I get my mommy. Why can’t she?”

Every one of these dots represents a protest against family separation tomorrow. Yeah. There are a lot of dots

Though many who show up to the rallies across the country were seasoned anti-Trump demonstrators, others were new to immigration activism, including parents who said they felt compelled to show up after heart-wrenching accounts of children forcibly taken from their families as they crossed the border illegally.

“I’m not a radical, and I’m not an activist,” said Kate Sharaf, a Portland co-organiser. “I just reached a point where I felt I had to do more.”

“As far as I’m concerned, this is a national emergency that we all need to be focused on right now,” added co-organiser Erin Conroy.

Immigrant advocacy groups say they’re thrilled — and surprised — to see the issue gaining traction among those not tied to immigration.

“Honestly, I am blown away. I have literally never seen Americans show up for immigrants like this,” said Jess Morales Rocketto, political director at the National Domestic Workers Alliance, which represents nannies, housekeepers and caregivers, many of whom are immigrants.

“We just kept hearing over and over again, if it was my child, I would want someone to do something.”

‘Zero chance it will happen’

Photo:
Protesters called for the abolishment of Immigration and Customs Enforcement, or ICE, and demand changes in US immigration policies. (AP: Mary Altaffer)

Saturday’s rallies are getting funding and support from the American Civil Liberties Union, MoveOn.org, the National Domestic Workers Alliance and The Leadership Conference. 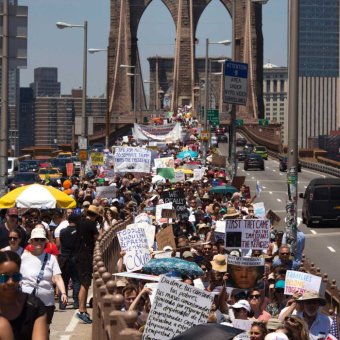 But local organisers are shouldering on-the-ground planning, many of them women relying on informal networks established during worldwide women’s marches on Mr Trump’s inauguration and its anniversary.

Immigration attorney Linda Rivas said groups had met with US authorities, congressional representatives and other leaders to discuss an escalating immigration crackdown that they said began decades ago.

But the family separation policy has been a watershed for attracting a broader spectrum of demonstrators, she said.

“To finally have people on board wanting to take action, marching, taking to the streets,” Ms Rivas said. “It’s been motivating for us as advocates because we have to keep going.”

Mr Trump took to Twitter on Saturday morning to show his support for Immigration and Customs Enforcement amid calls from some Democrats for major changes to immigration enforcement.

The Democrats are making a strong push to abolish ICE, one of the smartest, toughest and most spirited law enforcement groups of men and women that I have ever seen. I have watched ICE liberate towns from the grasp of MS-13 & clean out the toughest of situations. They are great!

To the great and brave men and women of ICE, do not worry or lose your spirit. You are doing a fantastic job of keeping us safe by eradicating the worst criminal elements. So brave! The radical left Dems want you out. Next it will be all police. Zero chance, It will never happen!

During an earlier protest on Thursday, nearly 600 people arrested in Washington including state congresswoman Pramila Jayapal, after hundreds of loudly chanting women demonstrated inside a Senate office building.

Many wore foil blankets similar to those given to migrants housed at US detention facilities.

The sit-in of protesting women was organised by two liberal groups, Women’s March and the Centre for Popular Democracy Action. The action lasted more than two hours.

In a written statement, the Capitol Police said around 575 people were charged with unlawfully demonstrating inside the office building.

The police said those arrested were being released after they were processed.

Under Mr Trump’s “zero tolerance” policy, the government has begun prosecuting all migrants caught entering the country without authorisation.

Mr Trump has halted his policy of taking children from their detained parents under public pressure but around 2,000 of them are still being held, with many families saying they’ve not known how to locate them.

Do I Need A Visa To Visit Dubai From Australia?