What makes a ‘real Australian’?

The survey by market research company Ipsos looked at the view of migrants who become Australian citizens.

It found that English language skills and employment boosted the perception of their status as a ‘real Australian’.

Of the 1,000-plus people surveyed in Australia, 72 per cent believed that immigrants with English language fluency were real Australians.

This compared to 42 per cent for immigrants with non-fluent English language skills. 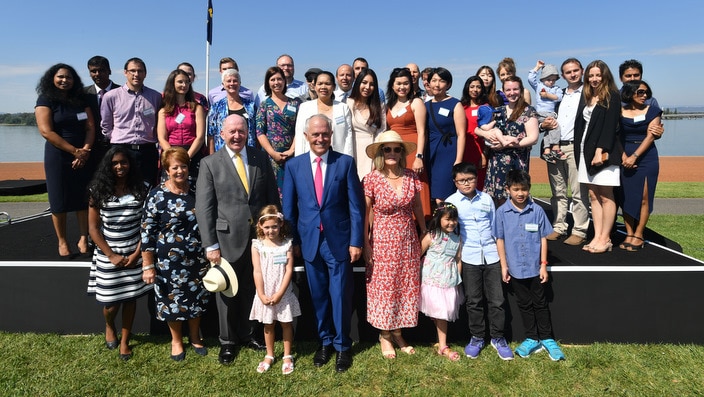 Seventy-two percent of survey participants also believed immigrants with a job were real Australians, but that figure lowered to 53 per cent for those without a job.

The figure dropped lower again to 46 per cent, for migrants married to an Australian-born person.

The survey was replicated in 26 other countries, with Australia ranked number five for its overall inclusiveness – behind Canada, the United States, South Africa and France.

However, Australia had the third highest share of survey participants, 68 per cent, who viewed migrants who become citizens as a ‘real national’, despite their English language skills.

This compares with the global average of 48 per cent.

And nearly four in 10 Australians, 38 per cent, considered migrants who have not become a citizen as a real Australian – ranked fifth compared to the 26 other countries surveyed.

David Elliot, Director of the Ipsos Social Research Institute, said the embracing of religious and cultural diversity by Australians is unsurprising.

“This is not that surprising given our multicultural society as it exposes Australians to a variety of cultures and religions, which helps drive acceptance,” he said.

The report noted that Australia was “especially prone to differentiating naturalised citizens based on both their employment status and their fluency in the local language.”

Mr Elliot said the negative regard is notable.

“However, while we are generally accepting of religious diversity and immigrants, we do show much less positive views of naturalised citizens when they aren’t fluent in English or don’t have a job, as well as lifelong immigrants who don’t become citizens and illegal immigrants who have lived here most of their lives,” he said.

As for self-perception, Australia ranked near the bottom of the list of 27 nations when asked whether they considered themselves real Australians.

Mr Elliot says he believes the proportion of immigrants and cultural attitudes could be behind the phenomenon.

“A number of things could be driving this finding such as our greater proportion of people born overseas – 32 per cent versus and average of 16 per cent, a negative perception of what a ‘real’ might be or mean and some wanting to distance themselves from that, or even the Australian preference for understatement, whereby we don’t like to classify or position ourselves positively but would rather someone else tell us that about ourselves.”

At least 50 per cent of respondents viewed members of religious groups as real Australians. However, that figure dipped to 48 per cent for Muslims.

Over 75 per cent believed second-generation immigrants raised in Australia are Australian, with those from a European or North American background more likely to be seen as real Australians.

The figure was at least 50 per cent for 15 other nations such as Chile, Canada and South Africa, and it sat below 50 per cent for seven countries, including Japan and Japan.

The figure lowered to 50 per cent for second-generation immigrants raised abroad, which is 18 points lower than for a naturalized citizen.

A person who is gay, lesbian, bisexual or transgender is viewed by the majority (65 per cent) as a real Australian.

The percentage was higher in France, Canada, Chile, Belgium and Sweden, who had three-quarters of participants supporting gender diverse identities.

A majority in Saudi Arabia, Malaysia and Russia thought a person from the LGBT community is not “not a real” national.

Seventy-eight per cent of the Australians surveyed said they had either travelled or lived overseas, compared to an average of 70 per cent for the other 26 countries.

Serbia, Sweden and Belgium led the pack of the world’s most well-travelled, registering in the 80-84 per cent range.

The report noted the figure for travelling Australians was particularly high, considering “our comparative isolation to countries in say Europe”.

The percentage of Australians who kept in touch with relatives abroad was also above the global trend – 37 per cent compared to 33 per cent.

Australians took a less welcoming view to those holding “extreme political views” (42 per cent) and prisoners who had been convicted and served a prison term (45 per cent).

For military veterans, 80 per cent of survey participants deemed them ‘real Australians’.

Ipsos said the research was not sponsored, and was initiated by the company “because we are curious about the world we live in and how citizens around the globe think and feel about their world”.

The Turkish Lira Is CRASHING! – What Does This Mean For Turkey?

Do I Need A Visa To Travel To The USA From Australia?