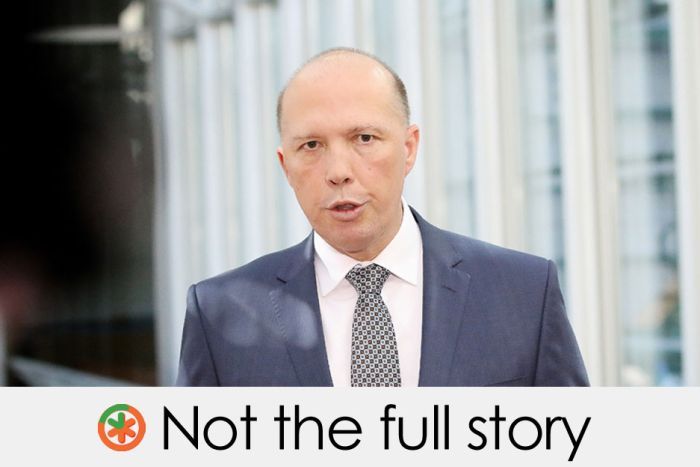 Photo:
Minister for Home Affairs, Peter Dutton, says that if asylum seekers can get to New Zealand then they can get to Australia and obtain a visa on arrival. Is that how it works? RMIT ABC Fact Check investigates. (ABC News: Andrew Kennedy)

The Minister for Home Affairs, Peter Dutton, has again addressed the issue of people smuggling.

Asked on Sky News whether he would consider a New Zealand offer to resettle asylum seekers from Nauru and Manus Island, Mr Dutton cautioned that people smugglers were targeting New Zealand because it offered a way of getting to Australia.
“New Zealand is the only country in the world where a New Zealander can come to Australia and be issued with a visa on arrival,” he said.

“If you come from the US, the UK, France or Canada you need to get a visa issued lawfully before you’re allowed to board that plane to come to Sydney, Perth — wherever it might be.


“So people smugglers know that if they can get people to New Zealand then they can get to Australia and that’s the marketing that’s taking place right now.”

Mr Dutton’s comments were similar to those aired on Sky News’ AM Agenda in May, just days after a ship believed headed for either Australia or New Zealand and carrying Sri Lankan asylum seekers was intercepted off the coast of Malaysia.

Responding to a question about whether taking up New Zealand’s offer to resettle asylum seekers from Nauru and Manus Island would be putting “sugar on the table” for “criminal smugglers”, Mr Dutton said: “To take up the New Zealand offer now … would be a complete disaster and Labor’s about to fall into this trap.”

Could asylum seekers who get to New Zealand then travel to Australia and obtain a visa on arrival?

Mr Dutton’s claim is not the full story.

This is because of a bilateral arrangement between New Zealand and Australia, known as the Trans-Tasman Travel Arrangement, which allows their citizens free movement between the two countries.

However, people seeking asylum in New Zealand do not enjoy this privilege. Furthermore, asylum seekers granted refugee status would still require special travel documents and would need to apply for a visa before travelling to Australia.

Experts told Fact Check that asylum seekers faced a lengthy process before being in a position to travel freely between New Zealand and Australia, needing first to qualify for citizenship.

Mr Dutton’s claim coincided with reports of a boat purportedly carrying asylum seekers being intercepted by the navy close to Australian waters last month. The boat was turned back to Indonesia under the Turnbull Government’s Operation Sovereign Borders.

Mr Dutton made similar comments about New Zealand’s offer to resettle asylum seekers after a modified tanker carrying more than 130 asylum seekers was intercepted by Malaysian authorities in May this year.

At the time, he issued a warning that accepting the offer would potentially give asylum seekers “backdoor” entry to Australia.

The Government argues that once asylum seekers acquired residency in New Zealand they would be able to travel to Australia without a visa.

Ms Ardern extended her offer to include asylum seekers still detained on Manus Island, before the centre was officially closed. Her offer was rejected by the Turnbull Government.

What is the Trans-Tasman Travel Arrangement?

New Zealand and Australia have arrangements in place allowing the free flow of their citizens between the two countries.

This agreement dates back to 1973 and allows citizens of Australia and New Zealand to visit, work or live in either country without having to obtain a visa before travelling.

Changes to Australia’s migration laws in 1994 meant that all non-citizens in Australia would require a visa in order to remain in the country.

So as to keep faith with the already existing Trans-Tasman Arrangement, a new visa was created specifically for New Zealanders visiting Australia — the Special Category Visa (Subclass 444) — which is issued routinely on arrival in Australia. 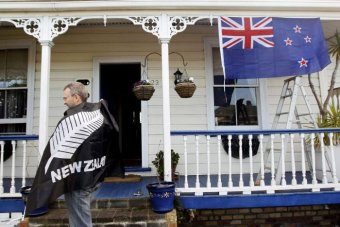 Photo:
Could settlement in New Zealand be a backdoor to Australia? (Reuters: Bogdan Cristel)

Ms Copeland, the director of clinical legal programs at Murdoch University’s School of Law, told Fact Check: “To apply for a Special Category visa, the applicant needs to be a New Zealand citizen with a New Zealand passport that is in force.

The visa doesn’t provide a direct pathway to Australian citizenship or a permanent visa. However, the Subclass 444 visa allows New Zealand citizens living in Australia access to government services such as Medicare, social security benefits and Commonwealth-funded education places.

“This is a temporary visa and it doesn’t confer the same rights and benefits as [those available to] Australian permanent residents.”

From asylum seeker to permanent resident in New Zealand

People seeking asylum in New Zealand must apply for refugee status to become a Convention Refugee as defined by the 1951 United Nations Convention on Refugees.

Only once their application is accepted can they apply for permanent residency and a work visa.

In 2016-17, more than 4,000 people were approved for residency through New Zealand’s international/humanitarian stream.

Of these, 236 people were approved as convention refugees and protected persons.


Andrew Lockhart, the national manager (refugee division) of Immigration New Zealand (the government agency responsible for border security and immigration), referred Fact Check to a government information sheet which states that asylum seekers can claim refugee or protection status on arrival at a New Zealand airport or port.

“The Refugee Status Branch of Immigration New Zealand decides all claims for refugee or protection status at first instance,” it states.

Immigration New Zealand examines each claim, determining whether there are “substantial grounds” for believing a person is at risk of being tortured or suffering cruel treatment should they be sent back to their home country.

According to the information sheet, once a claim is approved by the branch, the asylum seeker is recognised as a refugee or protected person.

They would then be eligible to apply for permanent residence and New Zealand citizenship, but only after they have remained in New Zealand for five years.

There are two main forms of documentation provided to refugees in New Zealand.

The first is a Certificate of Identity, which refugees normally receive on arrival.

This document cannot be used for travel — it simply provides proof of identity in New Zealand; for example, to allow the holder to open a bank account.

The second type is a Refugee Travel Document, which is issued to an individual who is not a New Zealand citizen but who has had their refugee status confirmed by New Zealand Immigration.

The document, recognised internationally, allows holders to return to New Zealand at any time. It also enables them to apply for visas to visit other countries.

The spokesperson added that the Department issues emergency travel documents for individuals whose passport has been lost, stolen, expired or damaged.

According to data provided by New Zealand’s Ministry of Business, Innovation and Employment (under which Immigration New Zealand ranks), applications for residence under New Zealand’s international/humanitarian stream totalled 1,715 in 2016-17 with 1,552 approved and 163 denied.

The highest rate of applications being denied occurred between 2009 and 2012, when 16 per cent were rejected.


From refugee to New Zealand citizen

“Normally, any groups entering New Zealand must wait until they have obtained New Zealand citizenship before they are eligible to enter Australia via that route.”

Murdoch University’s Ms Copeland said that in order for refugees to become New Zealand citizens, they would need to meet a number of requirements ahead of applying for citizenship.

Also, aspiring citizens would need to show that they “intend to keep living in New Zealand”.

Only after meeting these requirements and attending a citizenship ceremony would they be able to apply for a New Zealand passport, thereby meeting the criteria for the Subclass 444 visa to enter Australia.

Of the 3,642 international or humanitarian migrants whose New Zealand residence was approved in 2014-15, 96 per cent remained in New Zealand two years after their arrival.

Figures were not available as to what proportion of refugees applied for — and were granted — citizenship after the five-year period.

How much is the fee for a child included in an Australian partner visa?