Vietnamese students and tourists are travelling to Australia to earn thousands of dollars minding cannabis crops, exposing troubling loopholes in the visa system, according to a migration agent.

Jack Ta said his migration firm, which has offices in Australia and Vietnam, has represented as many as 300 crop-sitters who have been caught during police raids on cannabis grow houses.

An ABC investigation has found that cannabis grow houses in Australia are far more common than police had suspected, with Vietnamese organised crime syndicates at the centre of the multi-billion-dollar enterprise.

The syndicate model has three tiers, with heads of the syndicates insulated from those at the bottom — the crop-sitter.

Mr Ta believes young men and women from Vietnam have been travelling to Australia to crop-sit on student and tourist visas for much of the past decade — a suspicion shared by senior police. 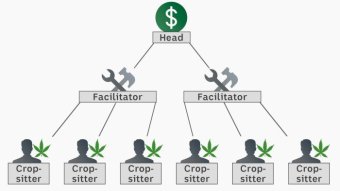 Most crop-sitters who are caught in Australia insist they were lured into the job after arriving in the country, but Mr Ta said many travel to Australia on fraudulent visas hoping to make a fortune.

“A lot of these young students came to Australia for the sole purpose of sitting in crop houses,” Mr Ta said.

Mr Ta said he had urged the Australian Government to only accept visa applications from registered migration agents, but had been ignored.

According to a UK anti-slavery commissioner report, the Vietnamese Government has an ownership stake in the majority of migration brokers in Vietnam.

Mr Ta said between the Australian Government’s reliance on international student revenue and the huge windfall of $2 billion generated annually from visa application fees, there was little impetus for change.

This allowed for dodgy brokers in Vietnam to produce fraudulent applications on mass, he said, using falsified financial records and even identities to secure student or tourist visas.

A Department of Immigration insider told the ABC such widespread fraud may never be uncovered, as there were no checks done on a person’s original visa application after they had been deported.

It means the integrity of the original visas granted to dozens of crop-sitters who have been convicted and then deported had not been questioned, the insider confirmed.

He also said there was no central database kept on the crimes a non-citizen had committed which led to their deportation, making it impossible to quantify how many Vietnamese crop-sitters had been caught.

The Department of Home Affairs deported 380 Vietnamese nationals in 2016-17.

Two crop-sitters who travelled on student visas, before being deported back to Hai Phong in northern Vietnam, told the ABC they were only lured into the work after they arrived in Australia.

Both young men made several thousand dollars from their work, but were caught in grow houses in Melbourne and then deported.

Like most crop-sitters, the men pleaded guilty, avoiding a more detailed police investigation into their student or migration histories.

One of the men, Pham Minh Duc, had his student visa expired within two weeks of arriving, but told police after his arrest that he and a fellow crop-sitter — also from Hai Phong — had only met while attending English language classes at Baxter Institute.

In a separate case that also raises questions about the recruitment of crop-sitters in Vietnam, a young man who had only been in Australia on a student visa for three months was found to have control over 370 plants across two houses in Melbourne’s outer south-east.

NSW Police Detective Inspector Gus Viera, who heads a strike force that has raided more than 570 grow houses and about $205 million worth of cannabis since 2011, said he had no doubt many of the people his officers had arrested travelled to Australia to crop-sit.

“They’re crop-sitters that have been bought into Australia as students and probably under false pretences, because they’re not studying anything,” he said.

The Department of Home Affairs estimates there are 2,340 Vietnamese unlawful non-citizens — the term given to those who have overstayed visas — currently in Australia.

In a statement to the ABC, a spokesperson for the Department said they were aware some people entered Australia to commit crime, but that those who were in Australia illegally were vulnerable to exploitation.

“Criminal networks are known to deliberately target and exploit non-citizens living in Australia to facilitate their criminal enterprises,” the statement said.

“The Australian Border Force regularly undertakes enforcement and disruption activity, often in collaboration with state, territory and federal law enforcement partners, to locate the criminals responsible for exploiting foreign workers, and to identify those engaged in organised visa fraud.”

Department of Immigration and Citizenship